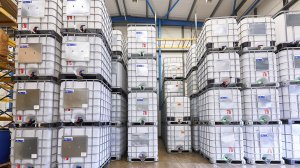 Since the partnership between global chemicals producer 2M Holdings and speciality materials company Celanese, established in 2014, demand for its methyl isobutyl carbinol(MIBC) compound, used to separate copper from ore, has grown substantially in the Central African region.

2M Holdings South Africa GM Denzyl O’Donoghue attributes this increase to the notable efficacy of the MIBC compound and its continued availability in the region.

He says 2M has amassed six new clients in the Copperbelt region and three new clients further north, which amounts to 14 clients on the African continent when existing clients are also taken into account.

“MIBC, when used as a flotation chemical, offers about 99.9 % efficacy in frothing or floating the minerals being extracted,” he enthuses.

O’Donoghue adds that, although importing MIBC from its suppliers, primarily in Europe, is a challenge, owing to current shipping constraints, the company has taken to holding sufficient inventory at its sites in South Africa to ensure it can meet demand for Africa.

“We brought in 45 containers of MIBC over the past three months with stock held at our Durban, Cape Town and Johannesburg branches.”

This stock will be sold to mines as and when needed and then transported using the mines’ channels and logistics.

The long-term goal of 2M Holdings is to maintain an attainable sales price for MIBC, as ore prices and processing demand ebb and flow with the performance of the global economy, he adds.

Froth flotation is the method in which minerals can be “skimmed” from the surface of slurry that is “foamed” with the assistance of specific chemicals, water and air bubbles.

He adds that MIBC is used as a frother, predominantly in the processing of ores, such as copper and molybdenum sulphide, as well as coal.

“This technique results in an industry-leading way to separate valuable minerals from extracted ore.”

MIBC can also be used in the production of lubrication oil additives, for anti-wear and corrosion inhibitors, and as a precursor to some plasticisers, O’Donoghue concludes.