De Beers to spend R30m on diamond exploration this year

De Beers to spend R30m on diamond exploration this year 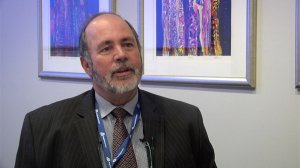 DBCM MD Phillip Barton speaks to Martin Creamer about the company's exploration programme in South Africa, as well as the company's plans for its Venetia mine. Video and editing: Nicholas Boyd.

This follows DBCM being granted 32 exploration licences across a number of South African provinces.

Following the gazetting of Mining Charter III, the DBCM board has approved the 2019 exploration programme, for which considerable preparatory work has been under way for some time. (Also watch attached Creamer Media video).

“We’ve always been very clear that we believe South Africa still to be highly prospective for diamonds,” Barton reiterated.

The historic company continues to use its historic data to assist it in its quest to find the proverbial needle-in-a-haystack, which sums up current diamond discovery difficulty.

The exploration licences granted are in the Northern Cape, Limpopo, Free State and North West provinces.

DBCM’s approach is to use new technology to re-examine old ground.

The company is at an advanced stage of investing $2-billion in the Venetia underground project. The Venetia opencast diamond mine in Limpopo is currently DBCM's only mine in South Africa.

The good news from the project is that there will be earlier-than-scheduled access to the underground operations.

“We’re looking to accelerating our mining through the openpit," Barton disclosed to Mining Weekly Online. "We’re on track to exit that pit in the region of two years earlier than planned a year or two ago,” he said.

The exiting of the pit is now anticipated to take place at the end of 2021.

The entire project is ahead of schedule and below budget “and we want to keep it that way”.

Underground mining will continue to 2043 and it is estimated that just under 100-million carats will be mined underground from 2021 to 2043.

Plant debottlenecking is under way to cope with the mining of just over 800-million tonnes a year.

Steps are being taken to ensure that making use of modern technology in the underground operations has a mutually beneficial outcome for all stakeholders.

Underground production will keep the output of diamonds from Venetia at a constant level of about 4.5-million carats a year.

DBCM is permitted to export all its product on the understanding that it brings back 40% of what it exports by value. This aggregation model involves bringing in larger rough diamonds to support the local diamond beneficiation sector that requires them.

“In that way, we’re able to provide the right goods to support the local cutting and polishing industry,” Barton explained.

Potential future sightholders have been selected as part of DBCM's beneficiation programme for special training. This is being done in anticipation of the trainees establishing their own local diamond cutting-and-polishing businesses.

Once the current batch of five graduate, the next batch will be taken in for similar grooming, which involves the acquisition of a broad range of skills.