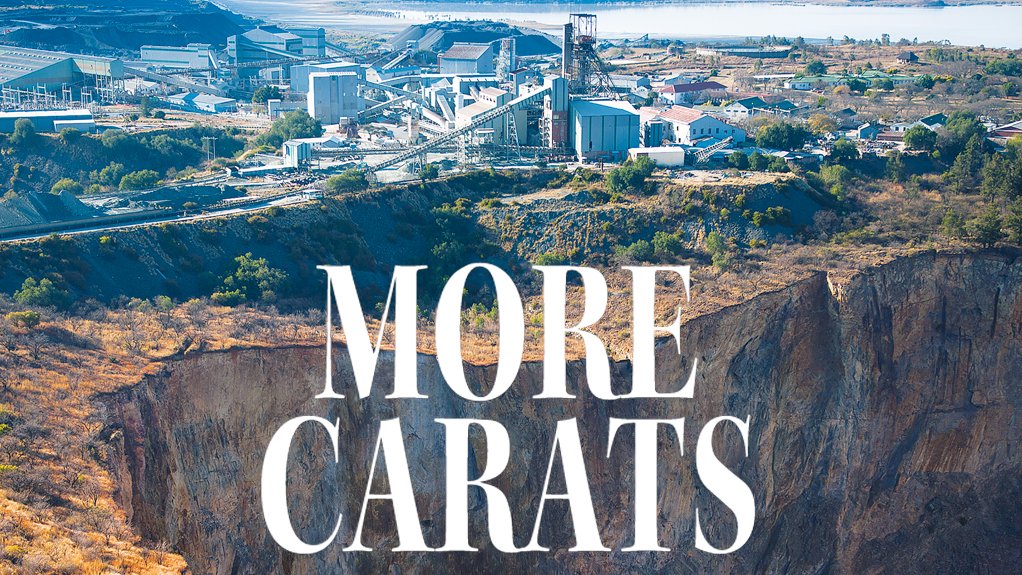 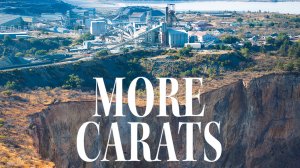 Development of the 5.7 ha C-Cut will consolidate the areas that the company is mining from eight to three. Petra CEO Johan Dippenaar says the consolidation will assist in reducing Gauteng-based Cullinan’s production costs – which currently range between R280/t and R290/t – to R200/t over the next two to three years.

The new winder system at Cullinan has been commissioned and the remainder of the shaft will be commissioned by mid-December, after which the mine will no longer have to undertake midshaft loading. This will improve efficiencies and reduce the number of times that ore is rehandled from fourteen times to three.

Petra is undertaking the current expansion project to increase the mine’s production from 729 496 ct to 2.2-million carats by the 2019 financial year. Dippenaar says Cullinan’s old mining areas have become “contaminated” with waste rock, which has resulted in the dilution of the ore grade and, therefore, lowered the mine’s earnings for each ton of ore treated. However, he points out that, through the implementation of the C-Cut project, pure kimberlite ore will in future be delivered to the mine for processing, thereby significantly enhancing the quality of diamonds produced.

The C-Cut expansion project will establish a new block cave on the western side of the orebody, in the upper portion of the major C-Cut resource, which is estimated to contain 133-million carats. It will also involve a large tailings retreatment operation.

The new block cave at Cullinan is expected to deliver more than one-million tons of undiluted ore in 2017, while the mine’s plant is scheduled to be commissioned by May that year and start production a month latter. Cullinan’s new R1.6-billion processing plant will ensure improved diamond liberation once in operation.

Dippenaar elaborates that the C-Cut development will result in the mine’s run-of-mine (RoM) grade increasing to between 38 carats per hundred tons (cpht) and 40 cpht in the 2017 financial year. The RoM grade is predicted to further improve between 49 cpht and 51 cpht by the 2019 financial year, when the C-Cut is set to reach full production.

Petra’s current mine plan envisions a life-of-mine (LoM) to 2030, but the major residual resources at the mine indicate that the actual LoM could be more than 50 years. Phase 2 of the C-Cut development, which is still at the conceptual phase and is not included in the LoM to 2030, aims to further expand Cullinan’s RoM production to four-million tons a year, with a yield of two-million carats a year between 2019 and 2030. The conceptual framework indicates that Phase 2 will expand the C-Cut by another 7.8 ha.

SHAFT DEVELOPMENT
Mining services company Murray & Roberts Cementation is responsible for delivering the R1-billion shaft sinking contract, which was awarded in August 2012 and is the largest portion of the C-Cut Phase 1 expansion programme.

Dippenaar remarks that caving is a “safe and proven” mechanised mining method that provides access to higher volumes of ore than other mining methods. Murray & Roberts Cementation business development executive Allan Widlake adds that block cave mining is “ideal” for kimberlite pipes, pointing out that this method is also used at Petra’s Finsch diamond mine, in the Northern Cape.

“Therefore, we had to instead only reinforce the internal elements of the shaft headframe, which included the alteration of the skip’s tipping path and the headframe crash arrangement. Conveyance arresting systems were also upgraded and inspection platforms were redesigned.

Widlake tells Mining Weekly that the deepening of the shafts has been completed. Shaft 1, which is used for rock hoisting, was deepened from 580 m to 934 m, while compartments 3 and 4 of the shaft were commissioned on September 23. Compartments 1 and 2 will be commissioned by the end of this year. Shaft 3, which is a personnel and materials shaft, was deepened from 805 m to 885 m and handed over to Petra for operational use in May.

Murray & Roberts Cementation project executive Robbie Düyts points out that the original upper sections of the shafts remained in production – hence, the shaft sinking and deepening were carried out beneath an active mining operation.

To ensure the safety of workers, an in situ 6 m rock safety pillar was placed between the active working shaft loading box and the spillage arrangement and the Shaft 1 deepening area. The pillar was removed at the end of August and the new and old shafts were connected.

A crew of 45 Murray & Roberts Cementation personnel is working on the project site; however, during the peak development phase of the programme, between May 2014 and May 2015, 386 employees were on site.

“We are scheduled to complete the final commissioning of the Shaft 1 compartments 1 and 2 by the end of December this year,” Düyts states.

MODERN PLANT
Dippenaar highlights that the modern processing plant being built at Cullinan has a throughput capacity of six-million tons a year, adding that the project has an internal rate of return of 25% with a payback of about three years.

Dippenaar emphasises that the plant is an important part of Petra’s plans to create a long-term sustainable future for the Cullinan mine and will replace the existing plant, which was commissioned in 1947 and has undergone various refurbishments.

“The technologies planned for the new plant include autogenous milling, high- pressure grinding rolls and the enhanced use of X-ray fluorescence to replace conventional dense-media separation plants to treat coarser material larger than 12 mm in diameter. These solutions will be implemented with the commissioning of the plant.”

The new plant will reduce the processing footprint at Cullinan from about 27 ha to about 4 ha through the reduction of engineering infrastructure, which includes decreasing the number of conveyor belts from 151 (spanning 15 km) to 22 (spanning 3 km).

Dippenaar explains that the facility is expected to improve the recovery of the full spectrum of diamonds, thereby growing the volume of stones recovered and better protecting large stones from breakage. “The new technologies [employed by the plant] will also improve the efficiency of material flow, thereby lowering operating costs.”

POTENTIAL RISKS
Dippenaar says the operational risks of the C-Cut relate mainly to the ramp-up period, when production volumes can initially “vary greatly”, as the optimal drilling and blasting cycles in the new areas of the mine will initially take some time to be achieved.

“Therefore, it is very important that we get into these cycles as smoothly as possible. Simply put, the more we do it, the better we will get at it. We have provided ourselves with sensible room to allow for adequate build-up times, which has enabled us to significantly mitigate any operational risks occurring during this sensitive period.”

However, Dippenaar emphasises that “no additional geotechnical risks” are foreseen, as the block caves have been well designed and modelled, which is made apparent by the smooth development of the C-Cut.