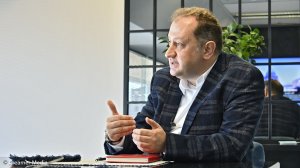 JOHANNESBURG (miningweekly.com) – The reduction in the consumption of mined products that the coronavirus was causing would likely result in a drastic fall in prices, Menar MD Vuslat Bayoğlu said on Monday.

While commodity prices were not feeling the full impact yet, China's economic growth was slowing and its steel production was declining.

Metals and minerals like manganese, chrome, iron-ore and metallurgical coal were not being consumed at the rate they were before the virus spread.

“There’s a huge disruption and people might be under estimating what’s happening. I think prices are going to come down drastically, and this will not be good for the mining industry,” Bayoğlu said in an interview with Mining Weekly. (Also watch attached Creamer Media video.)

The crash of the Purchasing Managers Index of China was, he said, an indication that the impact of the coronavirus on metals and minerals would be severe.

The captains of some ships and their crews were refusing to offload the cargoes in China for fear of contracting the virus.

“Shipping companies are in trouble because of the disruption. Because of coronavirus, their staff do not want to go to China, even though China is trying its best to keep things under control," he said.

“If you think about a manganese mine producing manganese but not being able to offload that manganese, that company will be badly affected. If they don't get the revenue, after a while they’ll be in financial trouble,” he said.

Mining Weekly can report that long-standing South African manganese, chrome and iron-ore mining and marketing company Assore made a surprise announcement on Monday that it would be delisting from the Johannesburg Stock Exchange after 70 years. Assore said in presenting its interim results earlier this month that growing manganese ore stocks in Chinese ports were causing price concerns. The company also reported that the chrome price had come under severe pressure during the half year.

Menar expects to be awarded a water-use licence in the second quarter of 2020 for its East Manganese project, in the Northern Cape.

The company’s move into manganese – from its controlling and management positions in Canyon Coal, Zululand Anthracite Colliery (ZAC) and Kangra Coal – is part of a strategic diversification into minerals and metals beyond coal.

“We were planning to start in May and we’ll see what’s going to happen with the price of manganese as we wait for our water-use licence.

“Once we’ve got our water-use licence, we’ll look at the market and we’ll see if we should start the project, or if we should wait a little bit and inform the authorities regarding what’s happening,” Bayoğlu said.

Most of the manganese mines, especially medium- and small-sized mines, have reportedly been unprofitable for some time.

“I’m concerned again that manganese and chrome are going to be affected harder, especially chrome. The ferrochrome business has already been hit,” he said.

The Menar group’s ZAC supplies anthracite to ferrochrome company Samancor, which has announced retrenchments, as well as Richards Bay Minerals.

“They supply products to China and if they can’t supply to China, they'll have to make a call at some point, if the coronavirus is still not under control,” he contended.

South African stocks plunged to a more than four-year low on Monday, joining a global sell-off in riskier assets as oil prices collapsed more than 30%. The declines in the Johannesburg All-Share Index and Top-40 index were compounded by fears the impact from coronavirus would intensify, Absa Bank said in a note.