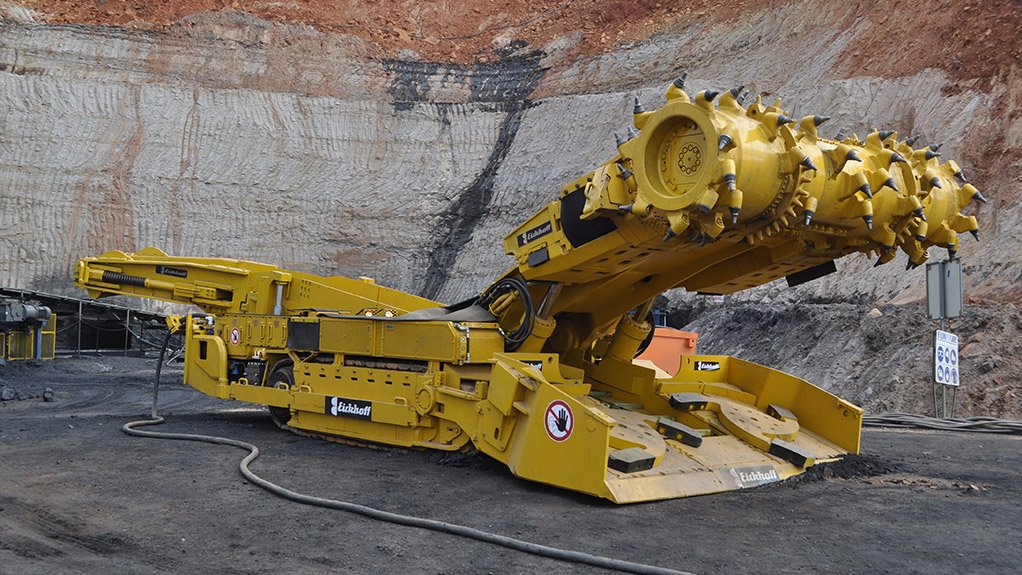 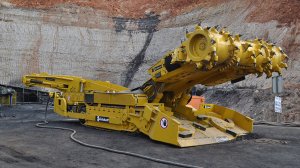 Van Tonder says the company delivered one CM2H–37 continu-ous miner in June to multinational Indian mining, steel and power conglomerate Jindal Steel & Power’s subsidiary Jindal Africa for its Kiepersol colliery, near Piet Retief. In addition to buying this machine, Jindal placed an order for another CM2H–30 continuous miner to be delivered in March 2015.

Eickhoff’s first prototype con-tinuous miner was introduced to the South African coal mining industry in 2003, having been manufactured with decades of expertise in manufacturing coal cutting equipment. The first CM production units followed in 2007. Since then, Eickhoff SA has supplied ten continuous miners to the local coal mining industry, says Van Tonder, adding that Eickhoff continuous miners are also being used in Chinese and Russian operations.

Eickhoff SA financial manager Werner Marx agrees, noting that, owing to the electricity constraints at mines, a machine that offers increased productivity and consumes less electricity by having less total installed power is a key benefit from an operational cost perspective.

Another key feature includes the machine’s manoeuvrability in narrow roadways in the room-and-pillar mining areas, he adds.

“In lower-seam mining, where roof and floor conditions are generally difficult, miners require a machine that does not cause extensive damage to a soft floor, but is robust and resilient enough to withstand roof-falls,” Van Tonder mentions.

The continuous miner’s hydraulic traction system enables it to mine in various conditions and to do so sustainably at steep inclines for lengthy periods.

The 30-type can cut from a minimum cutting height of 1.4 m on flat terrain to a maximum height of 3.0 m, while the 45-type has a minimum cutting height of 2.2 m and a maximum cutting height of 4.5 m. The 37-type can extract coal from 1.6 m to 3.7 m, while the 38-type operates in the range of 1.8 m and 3.8 m. “Individual models can be customised to suit customer-specific requirements, such as individual positioning of spotlights and beacons, with a choice of the most popular methane monitoring systems, individual colours and safety markings, as well as a common proximity detection system and drum lacings that suit even the most difficult cutting conditions,” says Van Tonder.

He further explains that the models are designed from a set of standard components that “enables interchangeability of expensive subassemblies” between the various models.

Van Tonder notes that Eickhoff’s fleet of continuous miners has been operational in low-seam conditions averaging between 1.8 m and 2.2 m. “Even though the coal-cutting conditions are tough at these seam heights, the miners maintain good production levels,” he says.

He adds that, currently, Eickhoff SA’s most popular product is the 37-type, but notes a significant demand for the 30-type as well.

He notes that the company provides extensive in-house training that includes safety, operator training, performance optimisation, diagnostics and fault-finding, maintenance, repairs and the rebuilding of machines.

Another core focus of Eickhoff Group is to optimise the reliability and other key aspects of the continuous miner range, which includes enhancing safety features.

In light of this, Van Tonder tells Mining Weekly that Eickhoff launched an engineering programme in June at its home base in Bochum, Germany, to further enhance the reliability and availability of the machine. He highlights the importance of the programme and says Eickhoff will use feedback on continuous miners from the South African market to incorporate suggestions in design solutions on the machines.

“Eickhoff will deliver a next-generation continuous miner that is even more competitive in terms of production and performance,” Van Tonder concludes.