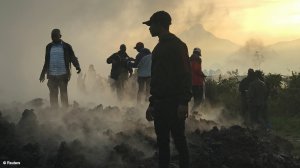 Residents walk near destroyed homes with the smouldering lava deposited by the eruption of Mount Nyiragongo volcano near Goma, in the DRC, May 23.

More than 200 earthquakes following a volcanic eruption in Goma, a city near Congo's border with Rwanda, are disrupting exports of tin concentrate from mineral-rich North Kivu province, the International Tin Association (ITA) said on Thursday.

The disruption to Congolese tin exports - which account for 8% of the world's tin-in-concentrate, according to the ITA - is likely to exacerbate shortages of the soldering metal, prices of which last week touched ten-year highs at $30 650/t.

Tin ore producers have been unable to obtain the permits they need to export the material because government offices in Goma, North Kivu's capital city, are shut, the sources said.

Congolese authorities ordered the partial evacuation of Goma on Thursday, saying Mount Nyiragongo volcano could erupt a second time with little or no warning.

Some 200 to 250 tonnes of tin concentrate move through Goma every month, the ITA said, citing a source close to producers in the region.

Tin concentrates typically contain around 50%-70% metal, so around 100 t to 175 t of tin-in-concentrate could be disrupted, the ITA said.

The ITA said it expects producers in North Kivu to continue operating despite delays to export permits, and sees a short-term build-up in concentrate stocks at mining operations, followed by greater exports once licences can be renewed.

The vast majority of North Kivu's tin exports come from Alphamin Resources' Bisie mine near Walikale, 230 km west of Goma.

Alphamin, which produced 10 319 t of tin-in-concentrate in 2020, said on Wednesday that government services relating to export documentation have been disrupted but are expected to return to normal next week "assuming no further volcanic eruptions".

Alphamin exports its tin via Beni over the border to Uganda, and ultimately to Kenya's port of Mombasa, from where it is shipped.