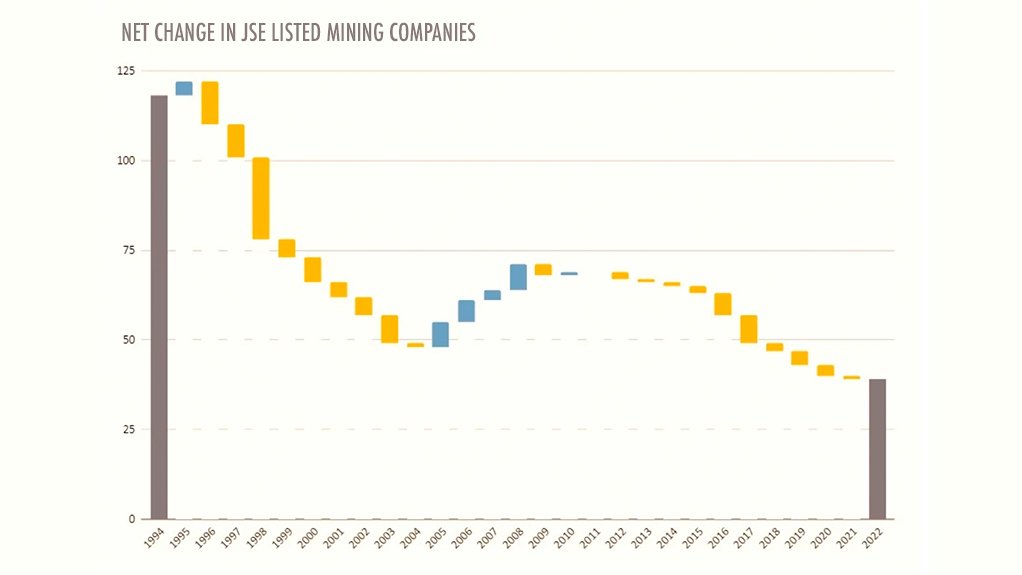 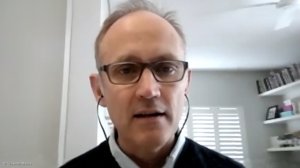 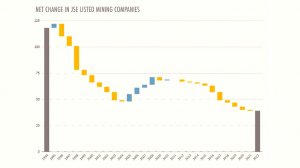 JOHANNESBURG (miningweekly.com) – In anticipation of next week's Junior Indaba virtual conference, AmaranthCX director Paul Miller has updated statistics on the change in the number of listed mining companies on the JSE over time. (Also watch attached Creamer Media video.)

It is not a pretty picture. (See attached chart.)

Since 2010 there has been a ten-year streak of year-on-year decreases in the number of listed companies. So far in 2021, there has been one delisting and no new listings, leaving just 39 listed companies. However, of those 39 companies, five are suspended companies that will probably never see trade on the boards again and seven companies have no mining assets in South Africa. This leaves 27 remaining listed mining companies on the JSE that still hold mining assets in South Africa. Not one of the 27 is a pure exploration company or ‘junior’ in a Canadian or Australian sense, and none appears to be involved in greenfield exploration.

AmaranthCX's database tracks about 100 mining groups that hold one or more of the 400 or so commercial scale operating mines in South Africa - excluding industrial and construction minerals or alluvial diamond operations. This means that on a simple count most South African mines are owned by companies that are not listed in South Africa. Some of these companies are listed abroad, however it is safe to say that the majority of operating mines are now held by private companies, said Miller in a media release to Mining Weekly.

One of the consequences of the increase in privately held mines relative to publicly held mines is the decrease in transparency and access to information about mines and therefore the mining industry as a whole. Private mining companies, despite having significant impacts on the environment and society, have no ongoing routine disclosure or integrated reporting requirements to society as a whole.

“We see this especially in the coal industry, where public companies have been disposing of their coal assets to private companies,” Miller stated.

Fifteen years ago 90% of South Africa's coal was produced by listed companies, with all the entailed public disclosure and governance.

“Now I'd hazard a guess that about 50% of South African coal is being produced by opaque private companies. This lack of transparency cannot be a good outcome of the move away from coal.

“I'd suggest that perhaps all mining companies, other than artisanal and small scale miners, should join listed companies and State-owned entities as Public Interest Entities with all the disclosure and audit requirements those require,” Miller advocated.

Many of the building blocks that can provide listing status for mining companies remain in place.

"We have a stock exchange that punches way above its weight relative to the size of our economy. We’ve got R9-trillion in contractual and other savings in the economy," Miller has pointed out in a Zoom interview with Mining Weekly.

"We have a wonderful tradition of being a market place for mining companies and we still have, to some extent, the analysts and the professionals in place to make it happen.

"But it’s not happening, which raises the question of what can be done," Miller said, adding that in 1980, when the gold price spiked, the JSE had half of all the world’s mining market capitalisation listed on it. (Also watch attached Creamer Media video.)

South Africa, with the bulk of world manganese resources, has 24 manganese mines, but none is directly listed on the JSE.

Mining Weekly would also like to highlight the competitive juices flowing in manganese that need to be taken into account by South Africans. For example, in Australia yesterday, the mining company Element 25 sold its first parcel of manganese concentrate to OM Materials from the Butcherbird manganese project in Western Australia.

Element 25 drew important attention to the supply constraints for nickel and cobalt that are forcing battery makers to use manganese in electronic vehicle batteries.

Some South African manganese mining companies have been burning diesel for power even though the Northern Cape is ideal for the generation of sun and wind energy.

Listing would draw more attention to such practices, which are poised to impact on manganese pricing, with those using dirty energy being potentially penalised.

Since the Mineral and Petroleum Resources Development Act was promulgated in the early 2000s, Miller noted that many companies had chosen not to list on JSE.

In Botswana, the government encourages listing and the Economic Transformation Committee  of the ruling African National Congress has been calling for incentivised JSE listing of juniors and hopes are rising that the government will respond positively.