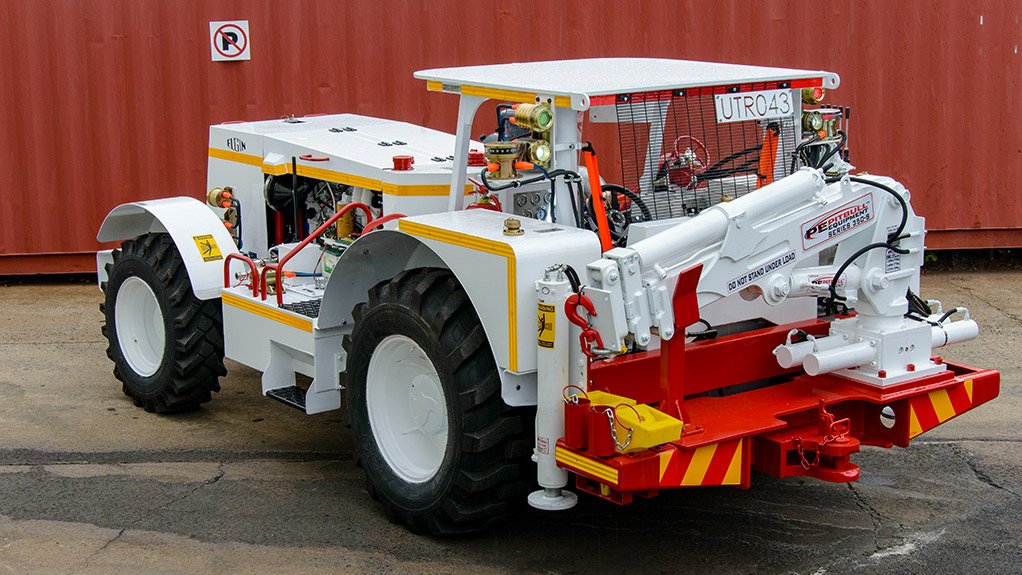 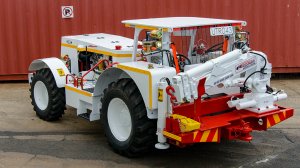 The tractor was officially launched locally in May.

The stringent compliance requirements in the extremely hazardous explosive conditions of the coal mining industry have prompted the company to invest in the design of its new model Elgin 112TR tow tractor and related systems, says Elgin Flameproofing newly appointed MD Peet Hartman.

“We now offer a far more efficient tow tractor with improved safety features that has also been ergonomically restyled to improve conditions for operators.”

New safety features include a certified engine intake and exhaust flameproof system with water-cooled turbo assembly, and a certified all-wheel brake system with an independent fail-safe brake on the front and rear axle system.

The company’s diesel engine flameproof systems and tractors are all locally designed, manufactured and tested and approved by the South African Inspection Authority and the Department of Mineral Resources.

Hartman explains that the new underground tractor is manufactured at Spartan, in Kempton Park, where it is flameproofed to function optimally in conditions where methane gas and coal dust are prevalent at local coal mines.

“Standard models available are the Elgin 112TR 20 and 112TR 18 tow tractors, which are available with a rear-mounted Pitbull 350 crane. These units are powered by a Caterpillar C7.1 112 kW engine supplied by diversified industrial group Barloworld Power, which has had a close and valuable working relationship with Elgin for many years.”

Hartman notes that orders for 11 machines from various large mining groups have been secured, adding that the machines, which are being manufactured, will be delivered with all the relevant approved and certified documentation.

“We believe that we will supply a quality product that will cope well in the underground conditions and with the tasks for which it has been designed . . .”

Hartman says the design team was led by Elgin Flameproofing’s Gary Huxham, who has been instrumental in introducing a comprehensive range of flameproof diesel engines and systems, as well as the underground flameproof tow tractors. “We believe that we possibly have the most knowledgeable team available to embark on projects such as this.”

He enthuses that Huxham and the Elgin team are renowned in the flameproofing industry for introducing reliable equipment used in critical safety areas throughout a broad spectrum of applications, with the focus on mining and surface petrochemicals industries.

“Originally, these tractors were based on a standard agricultural tractor and were fitted with flameproof diesel engine systems, which included electrical and starter systems. “These have been developed over the years to the current models, which now have proven six-cylinder engines, power-shift transmissions and constant 4 × 4 drives used in low- and high-seam coal mining applications.”

Hartman points out that the new design uses common components suitable for low-or high-seam operations. The advantage is that many coal mines work on both seams; therefore, the majority of components are common, meaning the carrying of fewer critical spare parts when using both models.

Hartman highlights that the basic specifications common to all new models include a certified, Elgin-designed wet-type scrubber flameproof system and a coolant package specific to the Caterpillar engine flameproof system.

He notes that the front-steering axle and rear-drive axle are heavy-duty 4 × 4 brake Dana axles and also includes a three-speed, power-shift Dana transmission and torque convertor. The engine, front, rear axles and transmission assemblies are common on all models.

All the major drive line subassembly components are approved by the original-equipment manufacturer as matched components.

“Elgin is also in the final stage of the development of an integrated proximity detection system (PDS) that is designed to detect mineworkers or equipment that may be in the immediate vicinity during operation. This sensor-type feature will immediately slow the tractor down, bringing it to a standstill and stop, thus, avoiding any collision.”

Hartman says the PDS interface, PDS systems and Elgin tractor are completed, and will be fitted to a tractor for final testing and sign off.

He concludes that the company is a proud Certex-approved mark holder – a product certification mark for explosion-protected products – and carries the audited mark for the manufacturing and repair of diesel engine flameproof systems and some electrical components.