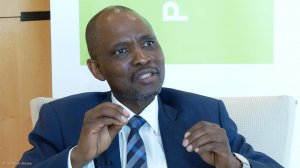 JOHANNESBURG (miningweekly.com) – Johannesburg Stock Exchange-listed coal-mining and energy company Exxaro Resources said on Thursday that it was experiencing higher insurance premiums in the renewal of its insurance policies.

In reporting 24% lower net operating profit of R2.4-billion in the six months to June 30 on lower coal prices, Exxaro CEO Mxolisi Mgojo told shareholders and analysts that the climate-change issue would be requiring “much more definite and structural changes in proactive response and actions”. (Also watch attached Creamer Media video.)

Acknowledging the risks and opportunities from climate change, Mgojo disclosed that the company – which is a 50% shareholder with Tata Power in renewable energy company Cennergi – was witnessing an increase in inquiries from shareholders about its climate risk response.

Mgojo said that the continuing delay in the granting of an independent power producer operating licence for the Thabametsi coal project, which was impacting on the development of the Thabametsi coal mine, served to highlight the vocal response of nongovernmental organisations against climate-related investment.

“This is about reality,” he stated, adding that Exxaro’s response to climate change required much more definitive and structural changes to its business model.

“We’re feeling the impact of increasing societal demand for proactive response and action to climate change,” the company stated in its presentation document.

Mgojo emphasised to Mining Weekly Online that Exxaro’s migration to a lower carbon environment had to be just and conscious to potentially negative impacts on its stakeholders, especially the poor and needy in South Africa.

The climate response strategy would include progress with incorporating the recommendations of the Taskforce on Climate Financial Disclosures (TCFD). The TCFD makes recommendations on the physical, liability and transition risks associated with climate change and what constitutes effective financial disclosures across industries.

On the metallurgical coal front, Exxaro, together with Anglo American, is reassessing a potential development plan for the Moranbah South project in Australia.

“I have the opportunity to have face-to-face engagement in Australia with Anglo Coal CEO where both of us expressed the seriousness of really running this project as quickly as we can to the extent whereby, hopefully, in the next coming year, we could possibly come in, provided that the project makes sense. That is the commitment that we have made to each other and that is the plan that we hope we can put to bed,” he said.

Metallurgical coal production at Exxaro's Grootegeluk mine in South Africa was in line with the comparative period. Sales volumes were slightly lower by 34kt (-6%) mainly due to the unavailability of trains to dispatch coal to the domestic market.

“As business, we can no longer sit on the sidelines and wait for government. It is now critical that we implore government to adopt a clear plan and to implement vital structural reforms that consolidate government expenditure and reduce fiscal pressure and debt. As business, we stand ready to work with government and labour to reignite investor confidence.

The group’s coal business managed to remain resilient in the face of inflationary cost pressures and falling coal prices, owing to proactive management, innovation and productivity initiatives which kept cost increases below inflation and drove efficiencies.

Domestic coal volumes dropped by 6% to 22-million tonnes in the six months to June 30, while exports increased by 5% to 4.3-million tonnes.

Exxaro responded to softer first-quarter demand for the top grade RB1 coal by competing in the RB2 market, where there was good demand and where value could be maximised.

The integrity of the balance sheet was also testament to the group’s ongoing disciplined capital allocation practices.

Brownfield projects were realised at Mafube and Leeuwpan and the greenfield Belfast project delivered its first coal six months ahead of schedule and on budget.

Looking ahead, Mgojo expects the global oversupply of thermal coal to continue to depress coal markets.