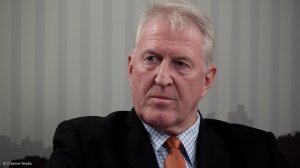 JOHANNESBURG (miningweekly.com) ­– The general feeling is that chip capacity will slowly start coming back in the next few months, but only to return the auto industry back to where it was pre-Covid, and not to the post-Covid surge, which resulted in platinum group metals (PGMs) prices going through the roof.

If the global auto industry experiences an increasing delivery of chips, then the guess is that a bottoming out of the market can be regarded as being under way now, with gentle improvement to follow. (Also watch attached Creamer Media video.)

The extremely high price gains that the PGMs market experienced with particularly rhodium and palladium – and even platinum rising to $1 250/oz for a short spell – were driven by the auto industry globally recovering strongly post-Covid.

Since then, despite vaccine progress, Covid variants have made their way through country after country, causing delivery inconsistency. Extreme weather also played a role in worsening logistics, which has resulted in considerable supply-chain disruption.

But the biggest impact of all has been the shortage of chips that host the processing and memory units, which have become synonymous with modern vehicle travel.

That is the view of Integral Asset Management chief investment officer Bruce Williamson, who spoke to Mining Weekly in a Zoom interview.

“The spot market is not your friend right now,” said Williamson.

The rhodium price has fallen by nearly 60%, palladium is the lowest since August last year, and platinum is down 28%.

“So, we’ve seen a very, very significant pullback and I guess the question is whether the current prices would hold. Ordinarily, I would have said yes, but there are market uncertainties as to exactly when chip capacity will be able to make the auto industry happy again.

“The general feeling is that chip capacity will slowly start coming back in the next few months. That’ll get the auto industry back to where it was pre-Covid. But it probably, until next year sometime, won’t get the auto industry back to the post-Covid highs, which took the prices to extreme highs. If we see increasing delivery of chips, then my guess is that we're probably seeing the market bottoming out here now and I wouldn’t say rush up, but it could gently improve,” said Williamson.

Mining Weekly: Do you expect the rhodium price to get back to its previous high level?

Williamson: Rhodium being just short of $30 000/oz was very, very high and that was driven by an absolute shortage of supply and very strong auto demand from the motor industry that could not afford not to buy. You had global manufacturers chasing a pretty small amount of rhodium in the market. But the way I see the chip manufacturing unfolding is that it won’t be strong enough to take the price back to those levels. Let’s hope that we’ve seen the worst now and that these levels can hold.

Is the palladium price also vulnerable to further pullback?

Since about mid-June, we’ve seen the auto industry starting to cut back on production due to the chip shortage and that means that either the miners themselves are going to be stockpiling 5%, 10%, 15% of their PGMs, or the auto industry, not wanting to be caught short, holding PGMs as stock. Every month that goes by and chip supply does not recover will mean that PGMs inventory is building up. You can just imagine that if this goes on for six, seven months, then suddenly there’ll be sufficient stockpiled supply in the pipeline for a while. It’s a particularly difficult period to work out exactly what chip capacity will be delivered to the global auto industry. In the Chilean market, for example, they’re waiting 13 months for new cars, so you can see that the chip shortage is extreme. Part of the problem, I think, is that the chip manufacturers know that 5G technology and infrastructure is being rolled out around the world. I suspect that 5G technology is going to require a higher level of chip technology and so chip manufacturers are probably not keen to go and invest billions in yesterday’s lower level chip technology, just to meet this current shortage. So, I think we’re in a difficult period when for a few months we’re not going to know which way it is going to go and the shortages of chips may prevail, which will keep car manufacturers under pressure, and that means a potential build-up of PGMs.

Will platinum remain the worst off?

Platinum was the one in a pretty big surplus and this lull that we’re going through owing to chip shortages will exacerbate and extend that surplus. Hence you saw platinum get up to about $1 250/oz and it’s back down to $920/oz or so. It really depends on the chip rollout now.

Over the longer term, will green energy and hydrogen economy demand make up for whatever PGMs demand is lost from reductions in demand for internal combustion engine cars?

There is lots of talk around it but I’m not seeing enough policy. We’ve got COP26 coming up in November. Governments need to come out with really good accurate policy in order that businesses can know what to do and where to go. My read is that many are pushing the electric vehicle side, which fits into the smaller normal autos. The hydrogen side is probably going to win in catering for the heavy-duty big trucks, buses etc. People are not going to buy electric vehicles or hydrogen vehicles if they cannot refuel and recharge them. Government needs to come out with highly incentivised policy as to why people would put battery stations in place and why the hydrogen fuel path would be built with stations to top up. Until that comes, I think it’s going to roll out slower than people think, which means that the internal combustion engine will prevail for longer than people think. But for platinum, it’s the hydrogen story, and it does not seem that the battery electric vehicles will push into the heavy end of the transport business. The batteries are just far too heavy, the payloads on those big trucks would be enormous and it becomes uneconomical, so PGMs win there, and it also brings ruthenium and iridium into the game.

Are the valuations of PGM mining companies on stock exchanges fully reflecting the value of PGMs?

Through 2019 to 2021, I don’t think the share prices fully reflected the profitability of our local PGM producers. I think that was because the market was not 100% tuned into the PGM basket of prices, i.e., the ratio you get the metals out of the ground weighted against the individual platinum, palladium and rhodium prices. I don’t think the shares fully reflected the prices that were being received for PGMs, and you can see that in the 7.5% and 10% mid-year June dividends. It doesn't suggest that the market fully reflected the profitability. Right now, I think the same thing is happening. Prices have pulled back, share prices have fallen back very sharply, and again I don't think the market’s quite pricing in today’s spot prices. I can tell that even at today’s prices, the miners will be making very, very good profits.

OPPORTUNITIES IN THE COMMODITIES SPACE

Investors continue to search for opportunities in the commodity space, amidst talk of a renewed super cycle, with many seeing the longer-term fundamentals of PGMs warranting attention.