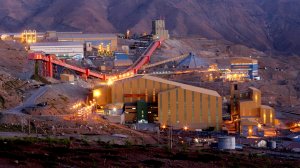 Photo by Codelco
LONG-TERM VISION Chile place’s great emphasis on due process and the rule of law, when it comes to their mining industry; even where it might not be to the country’s short-term benefit

The ZCM believes that Zambia can learn from Chile, which is the biggest copper producer worldwide.

The chamber recounts that, in 1970, Chile and Zambia produced roughly the same amount of copper, which, was about 680 000 t/y. However, currently, Chile produces 5.6-million tons of copper – about 30% of global copper output – and is home to seven of the ten largest copper mines worldwide.

The ZCM reflects on what accounts for this success. “Many things, but one stands out and that is investment. From the 1970s through to 2012, about $30-billion was invested in the country’s mining sector,” the chamber points out.

The ZCM notes that Chile has created a solid legal framework for foreign investors that guarantees sanctity of contract, protects their assets from expropriation and allows them to lock in agreed mining tax rates for up to 20 years.

The chamber elaborates that, when the country transitioned to democracy and free market economics in the late 1980s, the combination of favourable policies and politics unleashed a “massive wave” of private-sector investment in the mining sector throughout the 1990s. It says that, as a result, Chilean copper production more than doubled during that decade, even though copper prices remained muted.

“We see the world as a source of opportunity, rather than a threat, and, 30 years ago, we were the first country in Latin America to have this vision,” highlights Chilean Copper Commission executive VP Sergio Hernandez.

He cites Chile’s exposure to the world in terms of 65 free-trade agreements and 28 tax agreements and makes the point that Chile has respected the terms of every single one of them.

“In Chile, a change of government does not produce a change in the rules. This creates stability and gives certainty to investors.”

The ZCM comments that Chile places great emphasis on due process and the rule of law, when it comes to the mining industry, even where it might not be to the country’s short-term benefit.

The ZCM notes as an example the issue of mining concessions, which in many countries are subject to strict ‘use-it-or-lose it’ conditions.

“In Chile, a mining concession is indefinite once a company has paid for and secured a mining right; it is theirs to exploit at any time. It is a judicial concession, not an administrative concession. This has been an important part of our success,” Hernandez highlights.

Commenting on this aspect of the country’s mining code, a 2017 report by professional services firm EY on Chile’s mining industry notes that mining rights are not only permanent but they are also protected from expropriation.

“Compensation in the event of expropriation includes all potential future revenues from the exploitation of current reserves, which essentially amounts to full ownership,” states the report.

Chile’s success in growing the mining industry has not been at the expense of the rest of the economy, as government has also made diversification a central pillar of its agenda.

“We grow the cake using two strategic principles – the first being that we are open to the world in terms of trade and taxation agreements and [the second that] we encourage small, local companies to export and to become big companies,” Hernandez states.

The United Nations Conference on Trade and Development’s 2017 ‘World Investment’ report lists Chile as the world’s seventieth-largest recipient of foreign direct investment (FDI) between 2013 and 2015 and notes that the yearly FDI flows in this period stood at $20.3-billion, $21-billion and $20-billion respectively.

Hernandez says there was a time when the mining sector accounted for 85% of Chile’s total exports; however, it only accounts for 50% now.

Further, he notes that, as the Chilean mining industry and the broader economy have grown, mining’s tax contribution as a proportion of overall tax revenues declined from 34% in 2006 to 6% in 2015. “This is a clear illustration that our diversification process has been very successful,” Hernandez enthuses.

The ZCM states that an “interesting” feature of Chile’s mining industry is the presence of its successful State-owned mining company, Codelco, which is the largest copper producer worldwide.

The chamber points out that Codelco works side by side with some of the largest private mining multinationals, ranging from BHP Billiton and Glencore to Anglo American and Freeport McMoRan.

The ZCM states that the stereotypical image of a State-owned mining company is one of inefficiency, poor management and sustained losses. However, it emphasises that none of these things applies to Codelco. The entity’s half-year results for January to June reflected that the company produced 798 000 t of copper and posted a $1-billion pretax profit on the back of improved metal prices.

Meanwhile, Chilean mining company Empresa Nacional de Minería, or Enami, manager José Herrera offered other possible reasons for Codelco’s success. These included that the company had highly qualified staff, a professional board of directors and had in place structures that allowed them to get good results.

“It is a State-owned company, but is independent enough to make decisions like a private-sector company,” he added.

The ZCM comments that the “remarkable success” of the small South American country of Chile is not just in the sphere of mining, but also in its broader economic development.

“This makes it a worthy case study – not just for Zambia, but for the rest of the world too,” the chamber concludes.