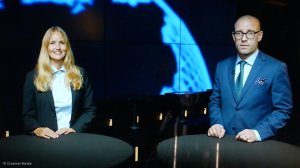 Sandvik is developing a new recycling process that will improve the quality of the recycled carbide to the same level as virgin, Axman revealed during the rock tool company's virtual occasion, covered by Mining Weekly. (Also watch attached Creamer Media video.)

Using recycled carbide can also reduce the carbon footprint from cemented carbide insert production by as much as 60% to 70%, she told the digital attendees of the innovation in mining event, which showcased a line-up of innovative rock drilling, rock cutting and loading and hauling product offerings, along with electrification and automation.

A rock drill facility and test mine were toured virtually; interaction took place in virtual booths including one-on-ones with Sandvik representatives and questions being put in real time.

“We have a global challenge on our hands. In order to fulfil the Paris Agreement and keep global warming well below the stipulated 2 °C target, we need to basically halve carbon dioxide (CO2) emissions each decade and reach a net zero position by 2045,” Sandvik rock tools division president Jens Holmberg pointed out.

In 2019, global CO2 emissions reached a staggering 37-billion tonnes. Reducing that by half, or 18.5-billion tonnes, would mean to reduce by an equivalent of 7.5-billion fossil-fuel-powered cars.

“For the record, there are only about 1.5-billion cars on the roads today. So, at first glance this seems like an overwhelming challenge that would mean we would need to change our way of living and thinking quite substantially. One would also be tempted to think that it would cost a lot to address this challenge.

“We started taking a hard look at our supply chain and we realised that we did not have the customer service levels that we expected from ourselves and that we were too costly. Since then, we've improved our planning processes and made a shift from air to sea transport, reducing our total CO2 emissions by one-third, or 5 500 fossil-fuel-powered cars.

RETURNING CEMENTED CARBIDE BACK TO VIRGIN

Sandvik is currently focused on greatly improving its recycling of cemented carbide. Cemented carbide is a hard material used extensively as cutting tool material. It consists of fine particles of carbide cemented into a composite by a binder metal and even if a drill bit is spent, good cemented carbide remains in it that can be used to create new carbide.

“By developing technology for local extraction of the carbide inserts from the steel body, we can avoid 90% of the transport costs and emissions from the return flow, while at the same time we generate job opportunities in the local communities around the mine.

“We’re developing a new recycling process that will improve the quality of the recycled carbide to the same level as virgin. We estimate that, under the assumption of use of clean energy, that using recycled carbides can reduce the carbon footprint from cemented carbide insert production by as much as 60% to 70%. By fully adopting recycled carbide, we could further reduce our CO2 footprint by 2 300 fossil-fuel-powered cars. Sustainability and productivity thus go hand-in-hand," Axman said.

Of the 1% of global CO2 emissions stemming from mining, 25% stems from drilling, loading and hauling, Holmberg pointed out.

“That means in total about 92-million tonnes of CO2 emissions, or an equivalent of 38-million fossil-fuel powered cars, yearly.

“When we talk about reducing these emissions, we tend to focus a lot on electrification, which is very important, don’t get me wrong. But we must not forget to leverage the technology already existing today to drive these numbers down.

“Using the very best rock tools, that generate the longest service life, the fastest drilling operations and the straightest hole is an excellent way to ensure sustainable and productive drilling, loading and hauling.

“In practice, this means developing the tools and services that generate the longest service life, the fastest penetration rate and the straightest holes.

“To exemplify, in a surface mine we introduced our charger bits, equipped with the latest power carbide and an aggressive cutting structure…. which gave an increase of penetration rate of about 35%, and in combination with the power carbide, we achieved an increase in service life of about 200%.

“Considering the fuel savings alone, this equated to a productivity improvement worth roughly $2.8-million yearly. Assuming this site being drilling constrained, this could equate to an additional output of metal worth about $57-million a year. At the same time, the atmosphere is spared from the CO2 emissions equivalent to about 3 500 fossil-fuel-powered cars – basically, CO2 emissions converted into bottom line profit.

“Simply put, we cannot afford to avoid focussing on sustainability, neither from a short-term-gain point of view nor from a survival of the planet point of view,” Holmberg emphasised.