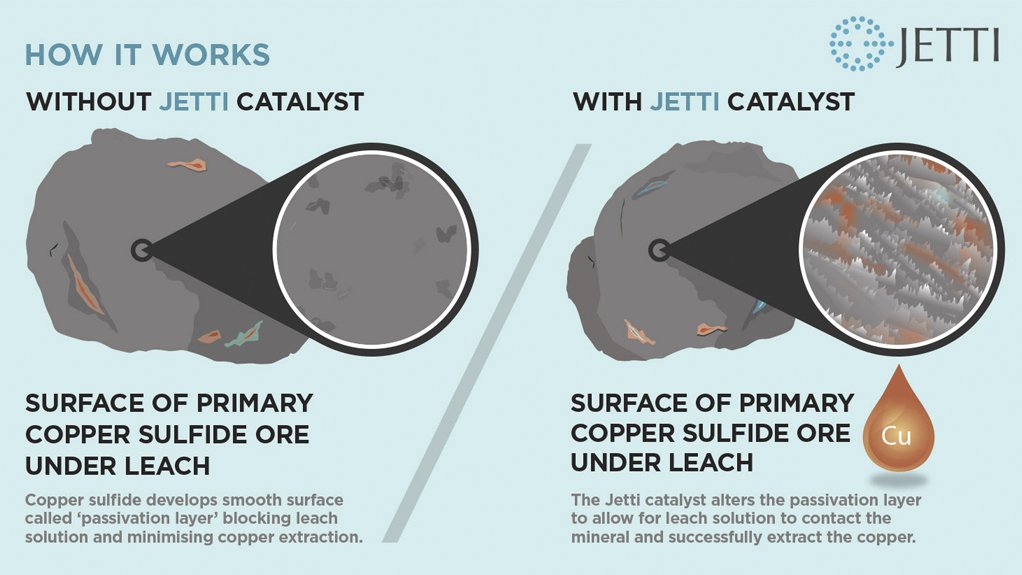 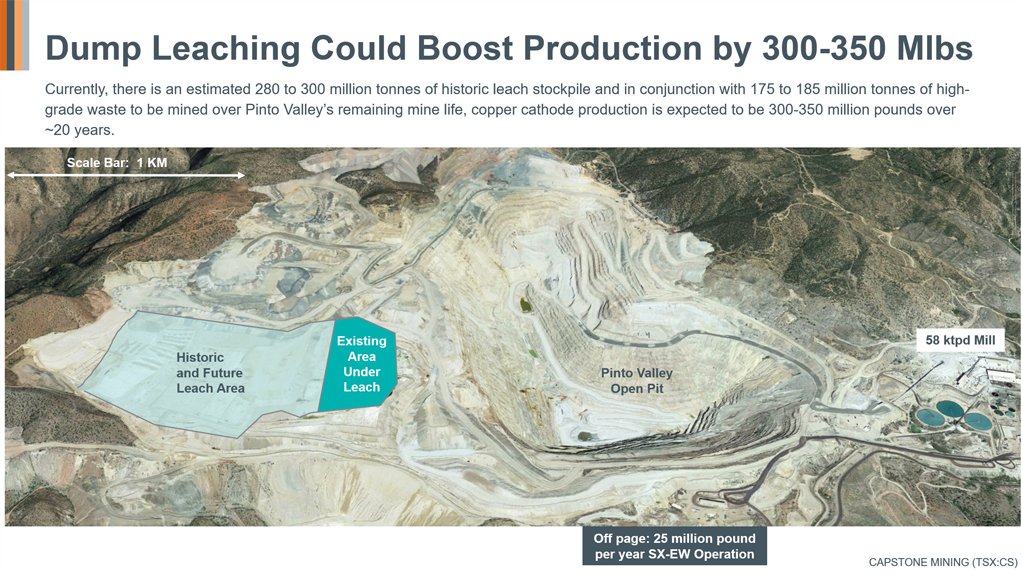 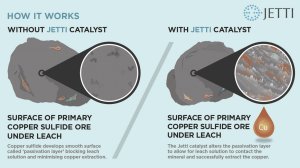 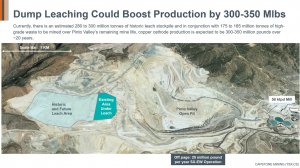 As a result of adopting the new technology, Capstone’s cathode production per area irrigated has doubled during the first year of the partnership with Jetti.

A plan to increase activity is being implemented with the goal of generating strong cash flow from Pinto Valley’s underused 25-million-pound-a-year solvent extraction and electrowinning (SX-EW) plant, which is currently operating at only 20% of capacity. The plan is to increase cathode production to between 300-million and 350-million pounds from residual and high-grade waste over the next two decades, thereby creating 30 new jobs at Pinto Valley.

Jetti’s patented technology makes it possible to extract copper from low-grade primary sulphides, such as chalcopyrite – the world’s most abundant copper mineral ore.

Jetti has developed and commercially deployed a catalytic technology that enables the efficient and effective heap and stockpile leach extraction of copper trapped in these challenging mineral ores.

Its catalysts enable the disruption of the sulphur metal bond of the mineral, enabling copper extraction to take place unimpeded. As a result, Jetti is now increasing profitability at operations and extending project life, while also converting uneconomic waste rock into valuable assets.

Capstone president and CEO Darren Pylot says the mining industry has long been pursuing a viable technology to leach low-grade chalcopyrite ores. “The results after year one of our partnership with Jetti are exciting because it means we can generate high margin from material that would have been waste.”

He notes that the Pinto Valley project represents an opportunity to position the mine more competitively, which will create and sustain jobs, and increase economic benefits in a socially and environmentally responsible manner.

The engagement of Jetti and adoption of its proprietary technology was an extension of Pinto Valley’s existing PV3 Optimisation Study, which is focused on several low capital expenditure, high-impact projects aimed at materially increasing the net present value of the operation. The results of the PV3 Optimisation Study is scheduled for release in the fourth quarter of the year.

Jetti co-founder and CEO Mike Outwin says Pinto Valley was a perfect candidate to pioneer its breakthrough technology, given the abundance of copper resources available for leaching and the underused plant and infrastructure in place.

Pinto Valley started producing copper cathode in 1981 from material below the cut-off grade of its mill that had been stockpiled since the early 1970s. This provided a 12% to 15% boost to total copper production as cathode accounted for an average of 16-million pounds a year through to the early 2000s.

Since then, the production of copper cathode has decreased consistently to under four-million pounds a year as a result of the impact of reduced leach kinetics as chalcopyrite is subjected to a passivation layer inhibiting further breakdown.

Potential to increase the mill cut-off grade to bolster copper concentrate production, thereby increasing the tonnage of high-grade waste available for leaching, will be studied during the second half of the year, after which an updated National Instrument 43-101 technical report is expected.

JETTI RESOURCES
Jetti, whose investors and partners include Mitsubishi Corporation and the University of British Columbia, as well as several US technology investors, reports that is in advanced testing programmes with some of the largest copper mines in the world. This includes about 20 mines in Chile, Peru and the US.

The company notes that extensive testing programmes completed with some of the world's biggest copper producers have provided it with a high degree of confidence to accurately predict the impact that its catalytic technology has on the recovery of copper from different ore types. As a result, Jetti is now proactively identifying and evaluating further opportunities to deploy its technology, in an accelerated manner.

"Jetti’s commercially proven and proprietary catalytic leaching technology addresses the key technical problem preventing recovery of trillions of dollars of trapped resources. We apply our catalysts to hundreds of millions of tons of ore, and significantly increase copper yields in a cost effective and environmentally responsible manner.

"About 70% of the world’s copper resources – estimated to be worth more than $20-trillion – are tied up in primary sulphide ores," it points out.

It adds that its technology also makes it possible to produce copper in a more sustainable manner. "Jetti’s technology allows for the use of leaching systems on primary sulphides, which have a far superior environmental profile compared with traditional extraction methods."

It notes that the environmental benefits include improved resource maximisation, significantly lower emissions and lower water use.

The board is led by chairperson Ken Pickering, former president of BHP Copper.