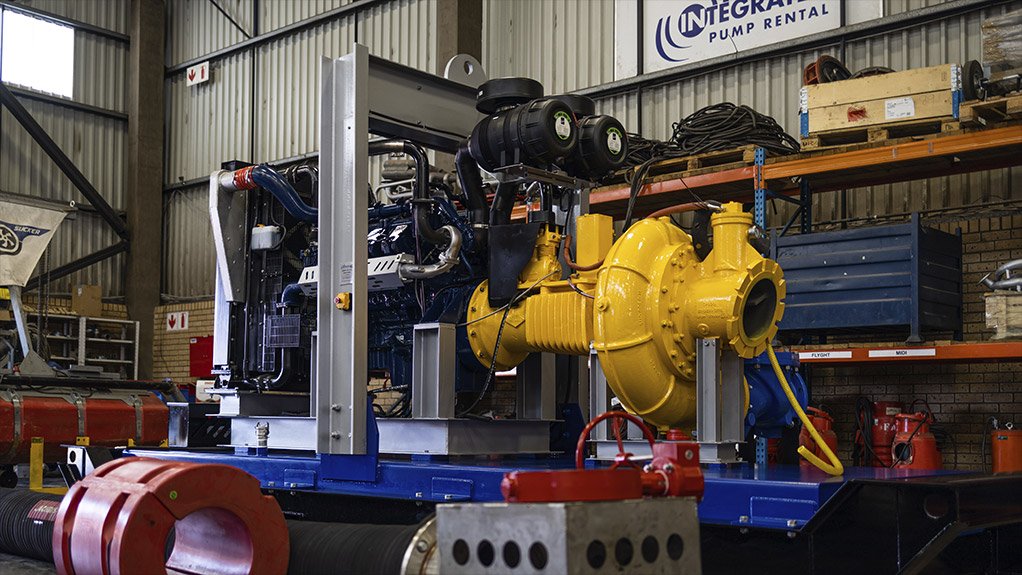 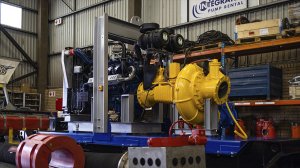 With a pumping capacity of 500 litres per second at a head of 5 metres, the Sykes MH300 has been delivered to a customer in the mining sector

Driven by a Kirloskar DV8 engine, this auto-prime Sykes pump unit was fitted with a custom engineered fuel tank and skid, according to Steve du Toit, rental development manager at Integrated Pump Rental.

“The sheer scale of the project is demonstrated by the unit’s final dry weight of about 8 tonnes,” says du Toit. “Measuring nearly 7 metres long, this pump set is 2,5 metre wide and 2 metre high.”

With a pumping capacity of 500 litres per second at a head of 40 metres, the Sykes MH300 has been delivered to a customer in the mining sector where it will dewater an open pit to ensure that no flooding occurs during the rainy season. The presence of abrasive particles in the water required that the inside of the pump be coated with tungsten, while the stainless steel wet end would resist acidity.

“Effective dewatering demands that you don’t just keep up with the required volumes, but that you keep ahead of them,” he says. “For this application, there was no better pump than this one.”

The Sykes MH300 is the top of Sykes’ medium-head range, with a 300 mm – or 12-inch – suction or discharge. This compares with the 6-inch suction of the well-known Sykes CP150 model popular among contractors. A generous 3,000 litre fuel tank was included in the design to allow for long running time, and this reduces the monitoring and refilling necessary by mine personnel.

“The pump was built for plug-and-play on site, with an auto-prime function for added ease of use,” du Toit says. “Supplied with the necessary pipework, it can be easily connected and immediately operated.”