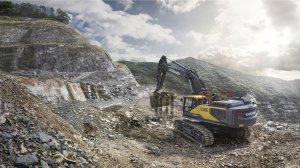 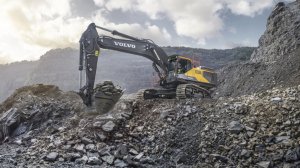 Following its global debut at the start of this year, the much-awaited Volvo EC550E crawler excavator is now available in southern Africa. Ideal for mining, quarrying and large infrastructure projects, the new 55-t class machine delivers up to 35% more productivity and a 22% improvement in fuel efficiency.

In January this year, Volvo Construction Equipment (Volvo CE) announced the expansion of the distribution of the Volvo EC550E crawler excavator to Tier 3 markets, including Africa and the Middle East. Babcock, the authorised Volvo CE dealer in southern Africa, has brought in its first unit, which has already been delivered to a customer, confirms Lance Mannix, GM Sales and Equipment at Babcock’s Equipment division.

Traditionally, an excavator’s production has a direct link to its operating weight. With the EC550E, Volvo CE managed to break the norm by introducing the Independent Metering Valve Technology (IMVT) hydraulic setup, in conjunction with a totally new engine trim on the D13 engine block and electrohydraulic command for the joysticks. As a result, the machine punches well above its weight, offering production more in line with bigger class machines in the 60 - 65 t range, despite the decals stating 55 t.

During the design of the machine, Volvo CE was able to accommodate a larger bucket (2,4 - 4,2 m³ capacity) by increasing the size and weight of the undercarriage, which gives greater stability. By load distribution surface/footprint of the undercarriage, the EC550E has almost an identical size to some competitor 70-t machines.

The 2 071 Nm (320 kW) engine, with rated power @1 600 rpm, is also well in line with certain competitor 70-t machines. This, coupled with the large displacement pumps (832 litres per minute), results in faster cycle times.

Boasting remarkable levels of power and productivity, the EC550E has the ability to fill a 35-40 t hauler or on-highway truck in just four to six passes – the result is optimum pass-matching and high-levels of production at a low cost per tonne.

The new model, says Mannix, slots in between the existing Volvo EC480D and the EC750D. While the EC480D model is aimed at customers looking for an efficient and reliable 50-t class excavator, the EC550E offers 35% greater production than the EC480D in typical dig and dump applications, meaning it is closer to the EC750D and so challenges the 60-65 t excavator class.

“The EC550E can fill a Volvo A35G or A40G articulated hauler with four to six buckets, which is considered a well-balanced match in the industry. It also means that Babcock now offers two perfect match excavators for A35G or A40G haulers in southern Africa – the EC750D and the EC550E,” says Mannix.

Customers can further take control of their productivity with an On-Board Weighing system, helping to ensure the optimum amount of material is loaded. The optional system provides real-time information to eliminate under and overloading of haul trucks and also records total tonnage for complete production management.

Customers can take fuel efficiency to a new level thanks to the next generation electro-hydraulic system with IMVT and engine/pump optimisation, which lowers engine rpm while optimising power. The main control valve uses IMVT, the latest pioneering innovation from Volvo and the most high-performing hydraulic system in the industry. It provides significantly more precise control compared to a conventional system and contributes towards up to a 22% improvement in fuel efficiency.

The IMVT is probably one of the major talking points on the EC550E as it is an industry first in this excavator size class. It involves a new concept main control valve (MCV). Instead of a conventional spool-type MCV, Volvo CE has built an MCV with dedicated valves – one each for feed and return for each actuator. This means that the pumps pump exactly according to demand at any given time, subject to the precise and exact requirement of oil for any specific actuator.

With a host of uptime-boosting machine features combined with the support of Babcock, customers can count on the EC550E to deliver maximum machine availability. With the optional delayed engine shutdown, customers can keep their turbocharger working in top condition for longer.

To avoid overheating, the intelligent function turns the machine off when the turbo charger has cooled down to the appropriate temperature. The EC550E can also be fitted with a high-performance fuel filtration system that delivers 99,7% water separation efficiency consistently over the full service life of the filter.

CareTrack, the Volvo telematics system, also helps customers to maximise machine uptime and reduce repair costs. Customers can choose to keep track of their machines themselves, or let Babcock and Volvo take care of it with ActiveCare.

“When it is maintenance time, grouped filters accessible from the ground level make servicing quick and easy, while the three-point right-hand access ensures the upper structure can be accessed with confidence when needed. Industry renowned features such as bolted anti-slip plates, high visibility guardrails and handrails, as well as large walkways further ensure the highest levels of convenience when servicing the machine,” Mannix concludes. ENDS