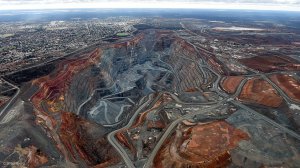 Newmont and Barrick's Super Pit mine

On the other hand, Newcrest’s Cadia operation, in New South Wales, produced 25 000 oz less gold in the June quarter.

For the June quarter, the Super Pit at Kalgoorlie, in which Barrick has a 50% stake that is up for sale, was the largest producer with 194 000 oz. Newmont’s Boddington operation, with output of 192 000 oz, produced marginally less gold than the Super Pit, while Newcrest’s Cadia East was the third largest with 176 610 oz.

Close highlighted that many companies in the gold sector were keen to take advantage of the prevailing prices by using various strategies to maximise their gold output.

She said that several of the juniors were either selling their ore or having it toll treated. This includes companies that are currently trucking ore, such as Empire Resources, Kin Mining, GME Resources, Royal Nickel and Kidman Resources.

“Recently Golden Mile Milling revamped the Lakewood mill in Kalgoorlie to provide a dedicated plant which is now available for toll treating smaller parcels of ore,” Close said. “This is in addition to the long-operating Greenfields custom mill at Coolgardie, plus the various operations that are doing deals with the juniors too.”

Several companies are also looking to come into production in the near future by refurbishing old plants that are currently on care and maintenance.

“Some producers are undertaking debottlenecking programmes in order to increase the throughput capacity in their treatment plants,” she said. “For example, at Tropicana, the AngloGold/Independence Group joint venture is currently halfway through an upgrade to increase capacity and improve recovery.”

“Spending money on exploration for a mining company is like research and development spending for an industrial company.

“It is absolutely essential for the long-term survival of the industry. Remember, with production nearing 300 t/y, a similar amount of gold must be discovered annually for gold reserves and resources just to stand still.”