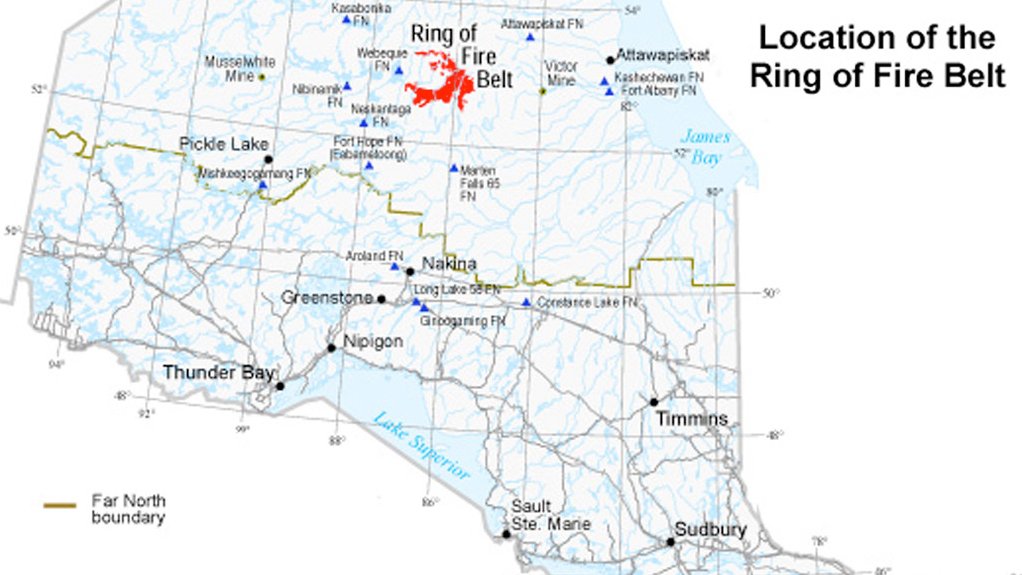 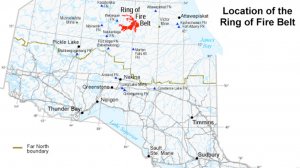 TORONTO (miningweekly.com) – For the third consecutive year, the Liberal Ontario government has made a C$1-billion commitment toward development in the emerging Ring of Fire (RoF) nickel/chromite mining camp, in the province’s remote far north.

The RoF presented a multigenerational economic opportunity for the province, with mineral potential calculated in 2014 terms to be worth about $60-billion, although that would be much less at today’s subdued commodity prices.

The remote RoF in the McFaulds Lake area of the James Bay Lowlands – about 540 km north-east of Thunder Bay – has attracted a lot of attention in recent years, with exploration drills turning to look for minerals, including chrome, nickel, copper and platinum-group metals.

However, there is limited infrastructure to move the mines in, as well as to move bulk ores out to market. The region’s junior first movers Noront Resources and KWG Resources were positioning themselves on what was in future set to become a dynamo of economic activity to the benefit of the region, Ontario and indeed all of Canada.

KWG Resources was just this week hosting a delegation of Chinese railway engineers from China Railway First Survey & Design Institute Group (FSDI) for consultations, with a view of potentially financing construction of a railway to link the minerals-rich area with markets.

Meanwhile, Ontario had approved, with amendments, the terms of reference for an environmental assessment for the largest RoF landholder Noront Resources’ Eagle’s Nest project.

GETTING IT RIGHT
According to Ministry of Northern Development and Mines (MNDM) spokesperson Phil Andrews, the provincial government had made significant progress towards realising the full potential of the RoF. Besides budgeting a billion dollars for the third year in a row, it had signed an important regional framework agreement with the nine Matawa-member First Nations that would inform future negotiations.

Since 2011, Ontario had contributed about C$78.3-million directly to communities and tribal councils to support community readiness and capacity-building activities, as well as to help them prepare for proposed RoF development opportunities. According to the ministry, over 3 100 clients have completed various training and support programmes to date.

“Our government remains determined to move forward with laying the groundwork to drive smart, sustainable and collaborative development in the Ring of Fire region,” said Andrews in a statement to Mining Weekly Online.

He noted that there was a critical role for the federal government to join the province at the table as it planned the development of this nationally significant project.

“Our government will continue to work with the Federal government on a new partnership that will invest in the socioeconomic and infrastructure needs in Northern Ontario.”

The MNDM was encouraged by the federal commitments in their 2016 budget related to working with First Nations. These significant investments would support community wellbeing and enhance the infrastructure required to ensure their ability to fully participate in opportunities related to development in Northern Ontario, Andrews advised.

With over 40 mines operating in Ontario, the minerals sector was an exceptionally important contributor to the Ontario economy and continued to serve as the largest private-sector employer of indigenous people in Ontario.

Andrews stressed that RoF development was an extremely complex undertaking. “So we have to make sure that we get it right,” he said.

BEYOND TALK
Mining Weekly Online on Friday spoke with KWG CEO Frank Smeenk while he was attending a lunch hosted for the FSDI delegation by Thunder Bay mayor Keith Hobbs.

“Everything is going swimmingly. They [the Chinese] know a lot of what is going on here, about working with First Nations, the province, the geology,” he commented.

On Saturday, the group will travel by charter for an introductory visit with the Ontario Northland Railroad executive and then onward to Montreal for an introductory meeting on Monday at Canadian National’s head office. The delegation would then travel by train to Ottawa and visit the House of Commons on Tuesday afternoon.

Smeenk expressed some frustration at the slow pace at which government support for development of the RoF was taking place.

“Rob Dowler, the chairperson of the RoF Infrastructure Development Corporation, is very well informed and capably assisted by Infrastructure Ontario. However, they too, like the MNDM, are looking to any proponent to come forward with a ‘gift-wrapped’ business case, and that is not the situation we have with this development,” he said, referring to FSDI, which had agreed to fund and undertake a feasibility study for the design and financing of a railroad that will link the emerging RoF mining camp with global markets.

“The chromite is a commodity of international trade that provides Canada with an opportunity to supply a better quality product at a lower price in a well-supplied market. There is a more strategic enthusiasm that needs to be generated beyond “getting it right,” as they say,” noted Smeenk.

DEVELOPMENT CORPORATION
He added that since the provincial government had first budgeted a billion dollars to kick-start RoF development in 2014, his company had not seen a cent.

“I haven’t seen it. I know they are spending a little money keeping the corporation in legal status, but I don’t think they have created a budget or spent any of that billion dollars. I believe it’s forecast to only be available from 2018.”

In August 2014, Ontario established the RoF Infrastructure Development Corporation, which could act as a vehicle to facilitate partnerships among First Nations and the provincial and federal governments regarding transportation infrastructure development in the region.

“The Ring of Fire secretariat has cost taxpayers a lot of money and the Auditor General said it hadn’t produced much. So I would hate to see a second agency being accused of the same thing,” said Smeenk.