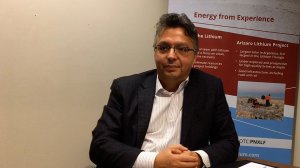 VANCOUVER (miningweekly.com) – TSX-V-listed lithium explorer Argentina Lithium on Thursday announced that it has appointed a new project manager to oversee a 10 000 m exploration drilling campaign at its two active projects in Argentina – located within the prospective Arizaro and Incahuasi salars.

The Vancouver-headquartered company is ramping up activity in Argentina, after recently expanding the property holdings at the Arizaro project, in Salta province, by a further 7 030 ha.

“Geophysical and seismic surveying is the next step before a Phase 2 drill programme will be undertaken to test for deep brines,” president and CEO Nikolaos Cacos told Mining Weekly Online in an interview (watch attached video).

He stressed the fact that despite the company now focusing on exploring its significant and prospective landholdings within the renowned ‘Lithium Triangle’, encompassing Argentina, Chile and Bolivia, it is still on the prowl for further regional consolidation opportunities. It is seen as a regional mining bright spot, as rising lithium prices encourage investment in and development of a robust project pipeline over the coming years.

At the new wholly-owned Incahuasi project, in Catamarca province, the company plans to move directly into a first drill programme, and is now in the process of obtaining permits to do so. The company recently announced the acquisition of the property, which controls the entire salar, as well as the results of initial surface sampling and vertical electrical sounding geophysical studies. The results included samples of 409 mg/ℓ lithium at surface.

“We are very encouraged by the results to date at these two large and promising projects. We are happy to now be stepping up the pace of work and we expect the next six months to provide significant data at Arizaro and Incahuasi,” Cacos stated.

Argentina Lithium on Tuesday reported results from the first two holes drilled at the Arizaro project, which encountered lithium-bearing brines below surface in the central area of the salar, with values as high as 257 mg/ℓ lithium. While the company has not yet reached a substantial brine aquifer, it was able to retrieve modest volumes of significantly anomalous lithium-bearing brines starting at depths of between 15 m and 356 m.

The depth of drilling was limited by the drill equipment used; therefore, the company plans to continue drilling in these areas using suitable deeper-drilling equipment, following more detailed geophysical and seismic surveys of the Arizaro basin.

“Our model for this property was for a brine aquifer at depth, so we were pleased to have anomalous results in our first two holes. These results support the theory of a source aquifer below where we were able to reach, therefore we are continuing our exploration to pinpoint the best location and depth to continue testing,” Cacos said.

A third hole drilled on the south claim block, Hole ARI-03, drilled through a halite cap to about 9 m, then 23 m of high porosity sand that was followed by a mix of low porosity mixed sand units to 236 m depth. The hole finished in the basement of red conglomerates of moderate porosity, the company advised.