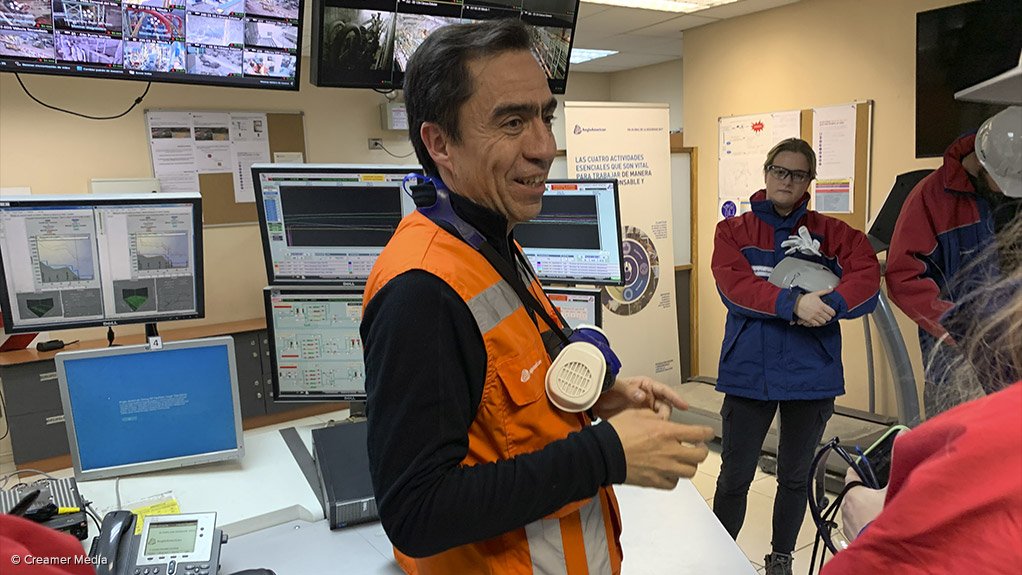 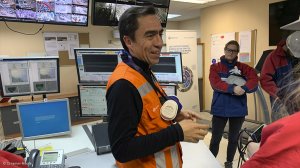 SANTIAGO, Chile (miningweekly.com) – Anglo American’s Los Bronces copper mine in Chile is targeting a 30% reduction of greenhouse gas emissions in the next ten years, with its two other environmentally protective, same-period goals being 50% less water abstraction and 30% less energy use.

The 152-year-old mine, located in the ice-topped Andes mountain region, is owned 50.1% by Anglo, 20.4% by Mitsubishi and 29.5% by Chile’s State-owned Codelco and joint venture partner Mitsui.

The Anglo-operated mine employs more than 4 000 people, 2 303 of them permanent contractors.

In his address to visiting journalists, Los Bronces GM Patricio Chacana flashed a slide on to the presentation screen that declared sustainability as “the heart of our business”.

At the mine's Las Tortolas tailings dam is the world's first floating solar electricity plant with 256 photovoltaic panels. Not only does this floating platform generate 150 000 kWh of clean, green electricity a year, but it also prevents the evaporation of 3 000 m3 of water a year.

In addition, more water is being recycled, with 100% recycling targeted for 2030. Water-saving technologies being developed include coarse particle flotation, dry tailings and tailings dam underdrainage. The ongoing drought in Chile has significantly impacted output at Los Bronces and will likely continue into 2020.

Among the mine’s decarbonising mobility plans are a 100% electric bus pilot project, as well as the introduction of hybrid electric vehicles to reduce greenhouse gas emissions. Being watched for potential addition to the truck fleet is the zero-emission hydrogen-powered haulage truck that is under development at Anglo American Platinum in South Africa. Mooted, too, is an evaluation of the viability of replacing trucks with environment-friendly belt conveyor systems at the opencast mine, which is located 65 km northeast of Santiago, 3 500 m above sea level.

“You need to rethink constantly,” Chacana told the international media contingent on which Mining Weekly Online is represented.

A manufacturing approach to mining is being applied and this is helping the mine to face down lengthening haulage distances, rising strip ratios, falling copper grades and inherent ore hardness.

The structured way of working has resulted in plant uptime rising to 95%, recovery of the byproduct molybdenum up 44% in the year to date, electric shovel performance step changing and overall equipment productivity lifting.

Anglo has had a presence in Chile since 1980 and also has stakes in the Collahuasi and El Soldado copper mines, and the Chagres smelter.

The current life of the mine of Los Bronces extends to 2040, with a $2.8-billion expansion project completed in 2011 increasing production capacity through new grinding, mineral transport and concentration facilities.

Earlier this year, an environmental impact study was submitted for the expansion of the perimeter of the opencast mine to access better quality mineral, as well as for an underground mine to extract mineral from a separate area of the deposit, which is located 5 km southeast of the current openpit.

Chile's unusual, ribbon-like shape, over a length of 4 300 km and average width of 175 km, has given the South American country a varied climate, ranging from the world's driest desert, the Atacama, in the north, to a Mediterranean climate in the centre and a rainy temperate climate in the south.

The Santiago region’s economic activity produces 30% of the country's total income and mining and Chile produced 27.7% of global copper output in 2018.