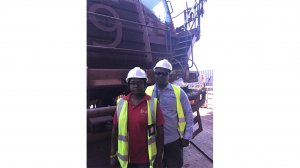 For six years, a small company in the Northern Cape town of Postmasburg struggled with the typical challenges facing South African small, medium-sized and microenterprises: inconsistent work, poor cash flow, and an inability to plan for growth.

Today, the company has six full-time employees – four technicians and two artisans – and they are looking to grow as they increase the scope of their work with Kumba Iron Ore’s Kolomela mine.

Matsietsa Brothers, a technology business that currently installs and maintains collision avoidance systems at Kolomela, is rapidly establishing itself as experts in the field. Its work plays an important role in the mine’s broader safety focus, as the systems help vehicles of all sizes avoid collisions in a busy open-cast mining environment.

This is a brand-new project at Kolomela, which presents a learning and development opportunity, says Matsietsa Brothers co-owner Tuelo Matsietsa.

“Kumba Iron Ore has been incredibly supportive in many ways – from providing business incubation training to ensuring consistent cash flow by paying us promptly. This is not only critical to the running of the project, but the sustainability of the business as a whole.”

The emergence of small companies is what makes it all worthwhile for Kumba Iron Ore supply chain GM Vusi Maseko, who is the driving force behind the company’s inclusive procurement programme.

Kumba Iron Ore’s inclusive procurement and enterprise development initiatives saw it spend more than R36-billion with black economic-empowerment-compliant companies, including small suppliers around its operations, in 2017. For towns like Postmasburg, which has a population of around 40 000, the impact has been significant.

“Our goal, as part of our vision of ‘re-imagining mining’, is to ensure our host communities become sustainable and will thrive long after the mining operations they serve are gone.

“One of the ways we do this is through inclusive procurement and entrepreneur development. This not only builds small businesses in their own right but increases economic activity in the surrounding communities by creating employment opportunities,” says Maseko.

For Matsietsa Brothers, the next step is to build on the services they currently provide to Kolomela mine as they embark on a growth journey.

“We would never have been able to get to this point without Anglo American. Enterprise development gives small businesses like us the boost we need to become big businesses,” Matsietsa enthuses.

Kumba Iron Ore CEO Themba Mkhwanazi is a speaker at this year’s Joburg Indaba, which will be held at the Inanda Club in Johannesburg. Anglo American is also a mining industry partner and sponsor at the conference which will take place on October 2 and 3.