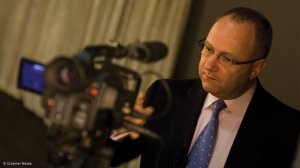 JOHANNESBURG (miningweekly.com) – Despite mining’s contribution to almost every aspect of modern life, the industry is still seen as an industry “that takes more than it gives”, Anglo American CEO Mark Cutifani lamented in his keynote address at this year’s Investing in African Mining Indaba, which is taking place in Cape Town, this week.

He highlighted that the mining industry – which contributes to, besides others, food production, construction materials, transport, clean energy and communication solutions – drives 45% of the world’s economic activity, whether directly or indirectly, while disturbing only a small fraction of the earth’s surface.

However, with criticism still being directed at the industry, Cutifani on Monday told delegates at the Indaba that the mining industry needed to face the challenge of finding "new, safer, more sustainable and cost-effective ways” to supply the essential raw materials needed for a rapidly growing and urbanising global population.

The global population is expected to reach 9.5-billion people by 2050.

“If we are going to continue to play an instrumental role in powering human progress into the future, we need to ask ourselves some tough, but necessary, questions about our values as an industry,” he said.

Simply put, Cutifani suggested that the future of mining be connected with emerging and next-generation societal values, which included increased transparency, responsible technological innovation, and sustainability and shared prosperity.

All of this, he added, was emerging as the world shaped a very different future society.

He also touched on four themes he believes best characterises Anglo American’s vision for the future of mining.

He touted responsible innovation as the first of these, elaborating that the mining industry was “on the cusp of a significant change”, led by the accelerating pace of technological innovation, including that of digitalisation, automation and artificial intelligence.

The industry is also tackling the challenge of becoming better connected to the needs of host communities and society more broadly.

At Anglo American, an innovation-led approach to sustainable mining called FutureSmart Mining has been developed. This approach brings together step-change innovations in technology, digitalisation and sustainability that are transforming how Anglo American sources, mines, processes, moves and markets its products.

Cutifani mentioned climate change as central to the future of mining and the planet, making particular mention of the mining industry’s role in the energy transition.

“Climate change is one of the defining challenges of our time,” he told delegates on Monday, emphasising that “[the industry] cannot ignore or underestimate its global impact, and the implications for every sector of the economy and human life as we know it today”.

Cutifani noted that he was encouraged by the industry’s progress so far in reducing emissions, but also in taking a more proactive stance in how the industry remodels its operations for a carbon-neutral future.

“Beyond the ‘mine gate’, the industry is thinking about the influence we can have to reduce emissions along the entire value chain – working with our suppliers, our peers and our customers where practical, to reduce global emissions.”

Through Anglo’s Sustainable Mining Plan, which forms part of its FutureSmart Mining approach, the miner believes mines can, and will be, carbon-neutral, and will use significantly less water as well deliver positive biodiversity outcomes.

In this respect, Cutifani told delegates that Anglo American had set “very ambitious targets” for itself to reduce greenhouse-gas emissions and improve energy efficiency by 30% by 2030.

He dubbed mining as the cornerstone of the energy transition, and referred to the metals and minerals that are produced that are the essential raw materials for all our modern lives – from the platinum group metals (PGMs) that clean vehicle emissions or enable hydrogen energy, to the copper essential for renewable energy and all phones and other devices.

South Africa, in particular, has an “unparalleled opportunity” to lead the hydrogen economy through its abundant endowment of PGMs, which Cutifani said “has innumerable benefits for the development of sustainable and clean energy”.

The picture is equally favourable for copper, which is a critical metal for a new era of clean, green, renewable energy. Copper is at the heart of every wind turbine, electric vehicle and solar panel, while also helping efficient energy storage.

Working together collaboratively with governments on ensuring that the mining industry has an adequate supply of sustainable, cost-effective and reliable energy was another of Cutifani’s key points.

“None of us can doubt the impact that rolling power blackouts have on the viability of South Africa’s economy, including our mining industry,” he said, adding that while Anglo American “is supportive of the South African government’s efforts” to deal with the structural problems at State-owned power utility Eskom, “more can be done”.

Cutifani suggested that by drastically streamlining regulatory processes to enable the establishment of self-generation power, it can supplement Eskom’s constrained capacity.

“Creating a supportive environment for projects . . . can immediately add additional power to the national grid, ease the burden on Eskom and proactively help develop sustainable energy,” he mentioned, adding that “we must act decisively to solve South Africa’s energy crisis to prevent any further loss of momentum for the country’s economy”.

During his opening address at the Indaba, on Monday, Mineral Resources and Energy Minister Gwede Mantashe assured the mining industry that it would soon be able to generate its own electricity without having to apply for a licence to do so.

Considering that mining companies were custodians of the world’s precious mineral resources, Cutifani said this placed a responsibility on mining companies to “act in the best interests of society, locally and globally”.

To do this effectively, he said, miners had to “think of a way to earn trust by demonstrating open and transparent stewardship of mineral resources”.

“I believe that mining has the opportunity to not only continue positively powering human progress, including through technology, towards a cleaner, greener, more sustainable world, but to do so in a way that is more closely aligned to what society expects of us. That is how we will deliver enduring value – locally and globally,” Cutifani said during his address.