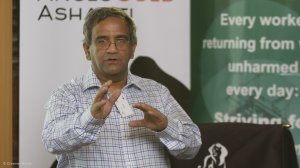 The company on Monday provided an operational update for the quarter ended March 31, highlighting that the achievement of strong free cash flow, along with an ongoing focus on cost management and efforts to leverage off weaker currencies, had yielded positive results and improved margins for its operations.

Free cash flow for the quarter was $70-million, which was a significant improvement to the outflow of $40-million in the first quarter of 2015.

CEO Srinivasan Venkatakrishnan (Venkat) noted that the company had delivered on a range of “self-help measures” to reduce debt using internally generated funds without diluting shareholders.

He pointed out that the gold miner, which had 17 mines in nine countries, had made significant cuts to corporate overheads and AISC as it sought to effect sustainable improvements to cash flow and returns.

“Notwithstanding our strong cost performance, we are redoubling our efforts to ensure we continue to capture as much margin as possible,” Venkat asserted.

Venkat explained that the lower output from continuing operations was mainly the result of planned reductions at the Obuasi mine, in Ghana, the Tropicana mine, in Australia and the Morila mine, in Mali, as well as an “unanticipated drop” in production from the Kibali joint venture (JV) project, in the Democratic Republic of the Congo.

Production from the company’s South African operations remained relatively flat year-on-year at 236 000 oz, compared with 239 000 oz produced in the prior comparative period, with safety-related stoppages remaining a disrupting factor.

Further, Venkat pointed out that total output of 625 000 oz from AngloGold’s international operations was lower owing to the sale of the Cripple Creek & Victor mine, in the US, in June 2015. The mine had contributed 41 000 oz of production in the first quarter of 2015.

Production had also been halted at the Obuasi mine, in Ghana, which had contributed 17 000 oz of gold in the first quarter of 2015.

AISC for the international portfolio, however, improved from $836/oz in the first quarter of last year to $822/oz in the three months to March 31.

Adjusted earnings before interest, taxes, depreciation and amortisation (Ebitda) for the quarter under review were $378-million, compared with $402-million in the prior comparative period, reflecting a 3% decline in the realised gold price and lower production.

MINING CHARTER
Meanwhile, in response to a question from Mining Weekly Online regarding the status of negotiations with the Department of Mineral Resources (DMR) on the 2016 draft reviewed broad-based black economic empowerment charter, or Mining Charter, for the South African mining industry, Venkat stressed that the negotiations, which were being undertaken by the Chamber of Mines (CoM) on behalf of mining companies, were confidential.

However, he added that AngloGold had “high aspirations” for the negotiations, as, in its current form, the draft Mining Charter “does not work for the industry”.

“Therefore, I am quite confident that a modified version of the Mining Charter will be announced post the current negotiations,” he said.