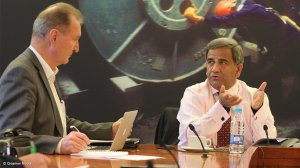 JOHANNESBURG (miningweekly.com) – AngloGold Ashanti is harvesting short-life gold mines for cash and will do so with more mines if the gold price falls below $1 000/oz, CEO Srinivasan (Venkat) Venkatakrishnan said on Monday.

“As an industry, we’re going through pretty rough times but the rougher it gets, the more our determination becomes to see it through and to fight harder,” Venkat told gold analysts and journalists.

Already being harvested after a falling gold price put an end to disposal negotiations are the Sadiola and Yatela gold mines in Mali, in which AngloGold has stakes of 41% and 40%.

"It signals a fundamental industry change," Investec Securities commented in a note.

CFO Christine Ramon reported that currency effects more than compensated for the drop in the gold price and inflationary pressures in the three months to June 30.

Weaker national currencies against the dollar contributed to the reduction in operating costs in South Africa, Australia, Brazil and Argentina.

Ramon said that AngloGold's net debt to earnings before interest, taxes, depreciation and amortisation (Ebitda) ratio of 1.44 was positioning the company well to withstand gold price volatility as well as production disruptions, within reason.

In the second quarter 84% of AngloGold’s Ebitda was generated by its international operations, which contextualises the low potential impact of a production disruption in the South African region through strike action.

“I’m hoping that we don’t end up with a strike scenario because we’ve just seen the damage that has been done to the platinum industry on the back of a strike.

“In the event that our workers want to go on strike, I’m just pointing out the diversified nature of our operations and their ability to withstand a strike,” Venkat commented.

“We’ve continued to improve margins even with the reduced gold price,” Largent reported.

“It’s like having an accident on a motorway. There are two approaches you can take. You can shut the entire motorway down or you can ring-fence the area where there is a problem and address that particular problem.

“What you are hearing the industry say is identify the area where there is a problem and let’s deal with it rather than taking one approach across the entire industry.

“We had a very successful approach at the Mponeng mine, where we worked with the Department of Mineral Resources, which ring-fenced the stoppage to a particular area of the mine. So there are successes in that regard as well,” he added.

Presenting cash-generative financial results for the three months to June 30 despite the falling gold price and decreased production, AngloGold reported cutting total cash costs to $718/oz, lowering net debt to $3.076-billion, lifting liquidity by selling its US Cripple Creek & Victor (CC&V) gold mine for $820-million and producing 6% less gold production on the cessation of underground mining at Obuasi in Ghana and the sale of the Navachab gold mine in Namibia.

AngloGold’s current wage negotiations with unions are taking place when gold prices are 30% below their peak of 2011, electricity tariffs have risen by multiples of the inflation rate and wage increases have outpaced inflation.

While weakening national currencies and lower oil prices are providing a partial cushion against the lower gold prices, the company also has in its locker the potential to get cash in through a joint venture partner in Colombia and revise the redevelopment schedule at Obuasi.

“We’ve delivered the sale of CC&V so we don’t need any more asset sales,” Venkat said.

AngloGold is into its forty-sixth month of dealing with falling gold prices and Venkat gave notice that the company’s steps to cut costs would continue unabated.