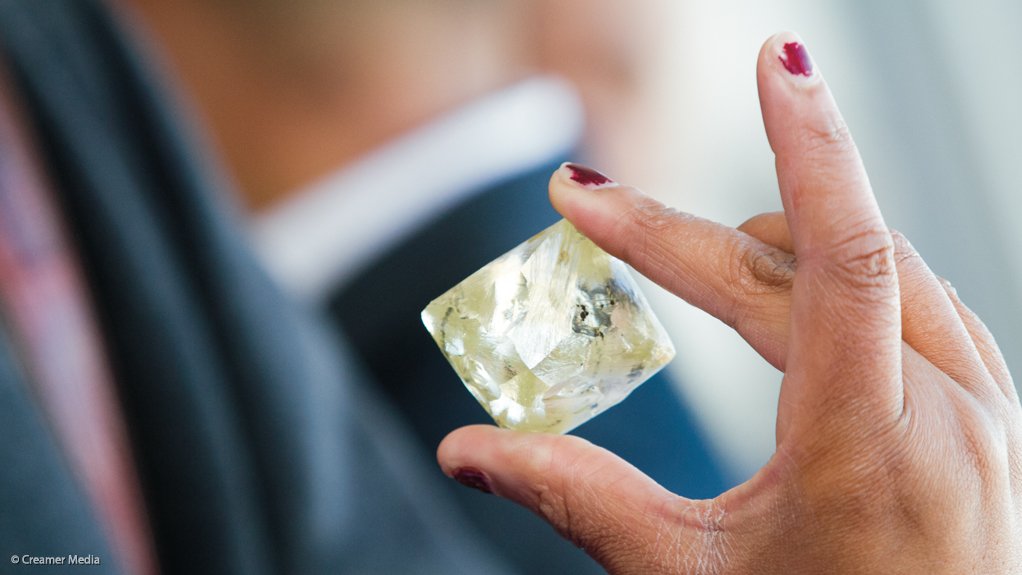 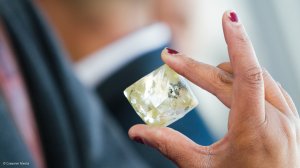 However, the group on Thursday reported that its 85%-owned De Beers subsidiary had recorded a 27% drop in output to six-million carats in the third quarter of this year, following the decision to reduce production to better reflect current trading conditions.

Production from the Debswana operation, in Botswana, decreased by 35% to 4.1-million carats as a result of planned maintenance being prioritised in light of current trading conditions at the nearby Jwaneng and Orapa mines.

Production at De Beers Consolidated Mines, in South Africa, decreased 8% to one-million carats, largely owing to reduced throughput and the processing of lower grades at the Venetia mine, in Limpopo, in response to current trading conditions.

Production in Namibia increased by 4% on the back of higher volumes from the marine operations, partly as a result of increased availability of De Beers’ diamond-mining Mafuta vessel.

Production in Canada, meanwhile, increased by 11%, owing principally to improved grades at the Snap Lake mine, in the Northwest Territories.

COAL
Meanwhile, Anglo American had lifted its production of export metallurgical coal by 8% to 5.5-million tons in the quarter ended September 30, benefiting from record production at the underground section of its Capcoal mine, in Australia, and developmental coal delivered from the nearby Grosvenor mine.

This more than offset the effect of the Canada-based Peace River Coal being placed on care and maintenance and an extended longwall move at Moranbah, in Queensland, to rectify equipment design issues, the group said in a production update on Thursday.

Despite Capcoal’s strong delivery, Australian export thermal coal production decreased by 13% to 1.4-million tons over the three months, owing to lower production from Drayton, as the mine neared the end of its life.

Export thermal coal production from Anglo American’s South African operations narrowed by 2% to 4.9-million tons, with lower production at Mafube, as the operation transitioned into new reserves, and the planned closure of one section at Goedehoep, partly offset by productivity improvements across all operations.

Production for supply to energy utility Eskom decreased by 15% to 6.8-million tons, predominantly owing to reduced demand from the energy parastatal.

Domestic thermal production reduced by 7% to 1.7-million tons in the third quarter owing to a safety related stoppage at Isibonelo.

In South America, production from Anglo’s Colombia-based Cerrejón mine increased by 7% to 2.5-million tons, owing to improved productivity and heavy rain in the comparable period of 2014.

COPPER DOWNTURN
Group copper output decreased by 3% to 171 100 t in the period, largely driven by the sale of the Norte assets, in Peru, while production from retained operations increased by 1%.

Production from the Los Bronces copper mine, in Chile, increased by 3% to 98 600 t, with higher-grade material processed to offset water constraints in July and August.

High levels of plant throughput were achieved in September, while the total year-to-date production impact of water constraints was 18 000 t, excluding mitigating actions.

Following high levels of precipitation in the latter part of the quarter, Anglo stated that no further water constraints were expected to impact on this operation this year.

Attributable production from the Chile-based Collahuasi mine decreased by 10% to 43 500 t over the three months on the back of major maintenance on two of the three smaller semiautogenous grinding lines to address previously reported vibration and structural issues.

“Plant operating times are expected to increase during the fourth quarter, with no major maintenance shutdowns expected,” the group held.

Production from El Soldado, in Chile, increased by 64% to 11 000 t over the quarter owing to higher-grade ore being processed.

Following the sale of the Norte assets and the announced changes at Collahuasi, Anglo had adjusted its full-year copper production guidance to between 680 000 t and 710 000 t from its previously stated 720 000 t to 750 000 t.

NICKEL
Anglo added in its production summary that nickel output decreased by 36% to 6 800 t over the three months, owing to the planned furnace rebuilds at the Barro Alto operation, in Brazil.

“The Furnace 2 rebuild was concluded ahead of schedule, with first metal tapped in April and Barro Alto is now producing at nameplate capacity.

“First metal was tapped following the Furnace 1 rebuild in September, also ahead of schedule, and ramp-up is under way, with nameplate capacity expected to be achieved by the end of 2016. The overall furnace rebuild is now expected to be completed at below budgeted cost,” said the group.

Production from Codemin mine, also in Brazil, decreased by 13% to 2 100 t, mainly owing to differences in maintenance timing between years.

Anglo had revised its full-year nickel production guidance upwards to between 28 000 t and 30 000 t.

The company added on Thursday that iron-ore production from subsidiary Kumba dropped 12% to 11.4-million tons in the quarter, while platinum output increased 14% to 614 300 oz.

Anglo spent $70-million on exploration and evaluation activities in the three months – a decrease of 34% on the third quarter of the prior year.