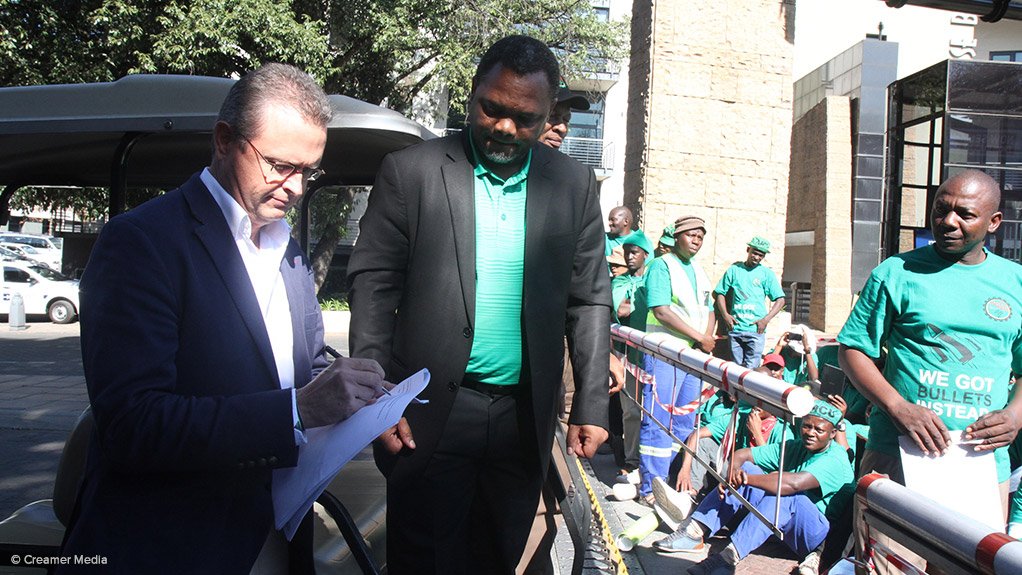 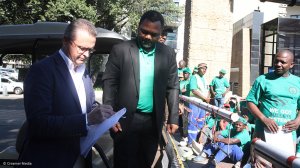 JOHANNESBURG (miningweekly.com) – The Association of Mineworkers and Construction Union (AMCU) on Friday delivered a memorandum of demands to diversified miner Glencore, outlining its members’ demands and grievances.

The memorandum called for a minimum salary of R6 000 a month for all employees earning less than that and a 10% increase for those earning above R6 000 a month.

Other demands included increases to the company contribution to workers’ medical aid schemes, transport allowances and living out allowances, besides other demands.

AMCU national treasurer Jimmy Gama handed the memorandum to Glencore Coal COO Murray Houston in front of about 50 AMCU protestors who had gathered outside the company’s offices.

The protest was organised by the union in response to a strike it undertook in Mpumalanga last month, which turned violent when striking protestors clashed with private security guards and police officials that resulted in a number of injuries.

AMCU asserted that instead of management constructively engaging with its members, it had called on private security guards and police officials to shoot rubber bullets and arrest them.

Glencore and Umsimbithi Mining, in a media release in April, categorically rejected allegations from AMCU that the companies had instructed security officials to open fire at striking workers at the Wonderfontein mine and said the only incident where rubber bullets were fired by the mine's private security personnel had occurred when a local farmer attempted to access his lands via a road adjacent to the strikers picketing area, whereupon a confrontation ensued between the farmer and the picketers. The mine's security intervened with the use of rubber bullets to protect the farmer who had come under attack from striking workers.

In the release, both mining companies said they respected the right of their employees to strike but were very concerned regarding AMCU and its members' willingness to break the law, ignore the court interdict and escalate their violent actions against the mine, employees, community members and the general public passing by the area.

Gama in a preamble to the memorandum handover lambasted the local mining industry broadly for its lack of genuine transformation and for its continued payment of “slave wages” to mineworkers.

Houston said he would take the memorandum to Glencore Coal’s management team and thoroughly review AMCU’s demands and respond to them by May 13 – the deadline set by the union.