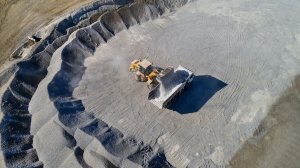 Midtier openpit miner Afrimat has confirmed it is in a healthy financial position and able to accelerate growth, after delivering a "pleasing" performance in the six months ended August 31.

“Given the strong cash generated from operations, our borrowings were significantly reduced, which places the group in a good net positive cash position,” says CEO Andries van Heerden.

In the six months under review, the company’s Bulk Commodities segment contributed the lions' share of group profit at R453-million, which was a near-40% increase on the prior comparable period.

Van Heerden attributes the segment’s strong financial performance to a favourable iron-ore pricing environment and new mines – the Jenkins iron-ore mine and the Nkomati anthracite mine – contributing to results.

Both mines are selling product into the local market, with Jenkins ramping up to produce 1.25-million tons of iron-ore a year.

Afrimat aims to create 500 job opportunities by the end of the 2022 financial year, as a result of the Nkomati and Jenkins operations.

Afrimat plans on bringing its Driehoekspan and Doornpan iron-ore assets online once volumes from the Demaneng mine start to diminish within the next three to four years.

The Bulk Commodities segment comprised 78% of operating profit in the six months under review, followed by Construction Materials comprising 13% and Industrial Minerals comprising 9%, relative to a split of 92%, 7% and 1% in the prior comparable six months.

Afrimat is, meanwhile, still planning the most optimal, lowest risk implementation strategy for the asset.

The company’s Construction Materials segment also experienced a return to pre-Covid-19 volumes sold, resulting in an operating profit of almost R80-million, compared with R2.8-million in the prior comparable six months.

This segment supplies aggregates of various sizes and technical specifications to large-scale civil engineering and infrastructure projects, as well as provides contract crushing, drilling and blasting services. Van Heerden states this improvement in volumes was mainly a result of normalisation to 2019 levels, rather than a result of a rise in construction activity.

He concludes that all of the company’s operating units are positioned to deliver outstanding service to the group’s customers, while acting as an efficient hedge against volatile local business conditions.