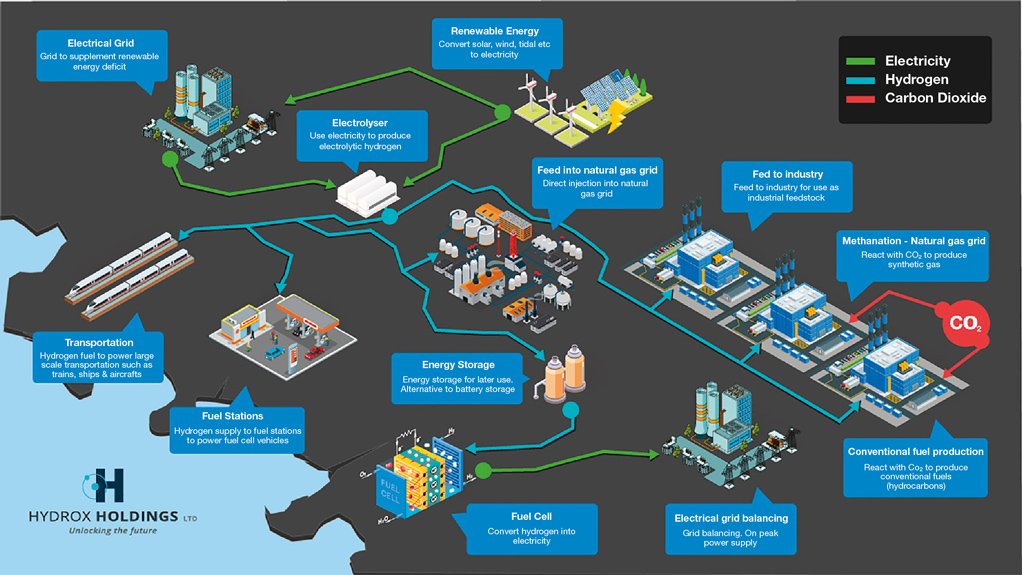 JOHANNESBURG (miningweekly.com) –  Acid mine water, and also seawater and brackish water, are being eyed for hydrogen production by innovative South African company Hydrox Holdings, which has patented a water electrolysis method that is attracting world attention.

The new membrane-free technology that the company has developed was presented at the International Convention on Electrolysis in Norway in June.

Support from Shell has been vital to the project being undertaken by Hydrox, which is a recipient of the National Science and Technology Forum Award for Innovation.

Its objective is to produce hydrogen below R100/kg, making it cost competitive with petrol. The intention is to make hydrogen readily accessible to the public by adopting the single-pump model pioneered at filling stations by Sasol in its early days.

Hydrogen has the potential to become a universal energy carrier, in the same way that oil is now, but without the environmental impact. ‘Green’ hydrogen is generally produced by splitting water into hydrogen and oxygen in electrolysers that use platinum catalysts.

“Our aim is eventually to produce hydrogen from renewable energy sources, particularly solar and wind, and to have hydrogen readily available,” Hydrox CEO Corrie de Jager said in a media release to Mining Weekly Online ahead of our feature on platinum-using hydrogen fuel cells.

"The world needs to take a new approach to energy. Fossil fuels are not only limited in their supply, but their use impacts the environment and the economy. Energy derived from using hydrogen as a fuel could be one of the planet’s saviours,” said Hydrox in the release.

About 95% of hydrogen is currently obtained from fossil fuel sources, resulting in the release of carbon dioxide into the atmosphere.

Hydrox’s divergent electrode flow through electrolyser can operate at temperatures greater than conventional systems owing to the absence of a temperature-limited membrane.

Hydrogen carries 39.2 kWh of theoretical chemical energy per kilogram making it one of the most energy dense non-nuclear energy carriers. In the release of this energy, only water is emitted, hence, if hydrogen is generated from renewables, its use in energy is a carbon neutral process.

The demand for hydrogen in these areas is growing, and this was evident, Cuomo stated, through the many initiatives taking place around the world, including the production of the Nikola semi-truck and Nikola’s partnership with NEL which involves the construction of over 700 hydrogen fuel stations across the US and further expansion into Europe; Japan’s plans to have 160 hydrogen fuel stations and 40 000 fuel cell vehicles on the road by 2021; and France’s $116.8-million plan to deploy hydrogen buses, trucks and boats to reduce carbon emission.

“There are different types of fuel cells, some make use of platinum some don’t, however, the proton exchange membrane (PEM) fuel cell, which is by far the most popular type, is reliant on platinum. When we speak of fuel cells installed in hydrogen power vehicles and fuel cells for hydrogen energy storage, these will pretty much all be PEM fuel cells,” Cuomo explained.

Platinum is used in fuel cells because it is the most stable and active monometallic catalyst. As an inert metal, it is not consumed or modified by the reaction, making it durable and long lasting, he added.