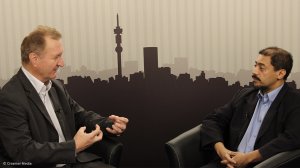 JOHANNESBURG (miningweekly.com) – The dysfunctional Central African Republic (CAR) has taken over as the country where “blood diamond” activity is again rife.

Diamonds worth $24-million have been smuggled out of CAR since the suspension of the Kimberley Process last year and Seleka rebels and "anti-balaka" militia are providing security to local diamond traders, who initially pay the warring groups for safe access to diamond fields and then for ongoing protection during mining.

Belgian authorities earlier this year confiscated diamonds ostensibly smuggled through the Democratic Republic of Congo (DRC) and Dubai to Europe from the ungoverned CAR, which is currently hobbling along as an impoverished failed State.

The chairperson of the Kimberley Process has put in a written request to the United Nations Security Council to alert neighbouring countries to the presence of diamond contraband.

“The problem at the moment is that political dialogue is at a standstill,” Vircoulon told Mining Weekly Online.

Elections scheduled to take place in February have been postponed to August, owing to the lack of political progress and a deteriorating security situation saw rebels exchange gunfire earlier this month with United Nations peacekeepers.

To stop CAR going the same way as Sierra Leone, Liberia and other blood diamond countries, authority over the mining areas needs to be re-established.

Cases of contraband have already been documented and diamond trafficking networks involved in the gradual resumption of artisanal mining activities identified.

With the traditional government deprived of diamond revenue, the transition towards an election in addition to UN peacekeeping is seen to be in urgent need of support.

Meanwhile, in the neighbouring DRC, Katanga governor Moise Katumbi has reportedly been treated in an overseas hospital for possible poisoning, following his apparent stance against a rumoured change to the DRC constitution, which would allow incumbent President Joseph Kabila to serve a third term.

Katanga is the DRC’s main mining province and uncertainty around a possible review of the DRC mining code as well as the upcoming 2016 general election is reportedly unnerving potential investors.

The DRC government will need an estimated $800-million to stage the scheduled election, an amount which is the equivalent of about 10% of the DRC’s national budget.

On the state of the mining code review, Vircoulon said: “This is at a standstill. In fact, it’s difficult to know whether the new mining code is still on the government agenda or not.”