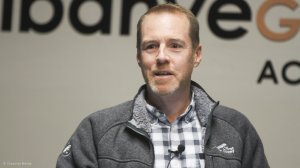 WESTONARIA (miningweekly.com) – Sibanye Gold is far advanced with plans to recover gold, uranium and sulphuric acid in a phased manner.

“All things being equal, we have a pretty good shot of securing funding by the end of 2016,” Stuart tells Mining Weekly Online.

It will involve turning the material into a slurry, transporting it to a plant, extracting the gold, uranium and sulphur from the Cooke, Driefontein and Kloof complex and then depositing the residue on a deposition site.

But envisaged is the building of an additional module every two or three years to increase the throughput of the plant incrementally to four-million tonnes monthly through the central processing plant.

That would mean the WRTRP eventually getting up to around 210 000 oz of gold a year and 2.5-million pounds of uranium.

But envisaged is an initial R9.6-billion of capital expenditure (capex) going into the establishment of initial construction of a regional tailings storage facility, plus the first module for the recovery of gold, uranium and sulphuric acid.

Should extra modules be added incrementally, the total capital bill is anticipated to be around R12.5-billion to R13-billion.

The early earthworks and civils construction packages for the building of the required plant have been taken to a high level of accuracy and the company is “very far advanced” in the permitting process.

“If this project were the 21-stage Tour de France, I think we must be on stage 19 now. We can see the finish line; we’ve been through all the hilly parts,” Stuart tells Mining Weekly Online.

The WRTRP proposals will be taken to the board towards the end of this year with a full execution budget and execution plan to be able to deliver an initial 1.4-million gold ounces in the next 18 to 20 years, and planning already in place for the 17 years thereafter.

Several mining houses have over the years spent a collective R800-million to understand the technical nature of the project, which began in 2008 with a mega-dump scheme evolving into the Cooke Uranium Project (CUP) through Rand Uranium.

Running in parallel was also the West Wits project under Gold Fields, which spent significant capital to understand the resources.

Sibanye now understands, from technical, metallurgical and industry perspectives, how to deliver the gold and uranium with a financially robust outcome.

Fundamentally premised on creating a uranium platform, the CUP had a strong uranium resource in the Cooke tailings dam, which contains 34-million pounds of uranium at three to four times the average grade of any dump in the area.

At the same time, the West Wits tailings project under Gold Fields was driven by the exceptionally high grades in the Driefontein tailings complex, which had the required scale, but lacked high uranium grades.

As these can now be put together without the duplication of capex, the WRTRP is regarded as having an excellent chance of significant success under Sibanye, which is able to leverage the synergies of the former Rand Uranium and Gold Fields projects.

At the project’s ‘get-into-business’ disposal are 70-million tonnes of material in Driefontein’s three and five tailings dams, which contain 1.2 m ounces of gold, as well as the material in the Cooke tailings dam, which has 34-million pounds of uranium.

These dams alone have the potential to get Sibanye into the business of surface material retreatment and cover the large portion of ‘getting-into-business’ capex.

Then, at the back-end, is an additional 500-million tonnes of additional Driefontein and Cooke resources, which offer an additional 4.5-million ounces of gold and 65-million pounds of uranium, outside of the ‘get-into-business’ start-up phase.

Existing infrastructure is also becoming available for use. For example, in 2020, when the WRTRP is scheduled to come on stream, a recently upgraded carbon-in-leach plant, currently treating surface rock material, will become available to process WRTRP gold.

Sibanye does not intend treating every single tonne of ore that gets taken from the tailings dam.

It will be producing a float concentrate that contains most of the gold and uranium and will be processing only that.

It will, thus, only be incurring operating costs where they need to be incurred in order to produce gold with a solid profit margin.

That is why the existing infrastructure in the Driefontein complex, plus the existing Ezulwini plant, offer beneficial ‘get-into-business’ help.

Earmarked is a capex investment of R9.6-billion into the declining West Rand economy, where the WRTRP will offer another 35 years of mine life, along with 5 000 jobs during construction and the 500 sustainable jobs thereafter.

But more than the social benefit of WRTRP is the environmental one.

Over the last 50 years of mining, tailings with a high sulphuric acid generating potential are located above dolomites that are critical for the area's water supply.

By taking the sulphide material off the dolomites and putting the sulphur into sulphuric acid that Sibanye uses in its own leaching process, the WRTRP lowers water risk and results in the opportunity to deposit a residue free of sulphur and uranium nasties away from the dolomites.

Of the 1.3-billion total resource, Sibanye currently has access and owns 750-million of that tonnage, which contains 6.5-million ounces of gold and 100-million pounds of uranium.

“We’re focused on getting into business and not doing this in a big bang shot,” Grant tells Mining Weekly Online.

Initial Sibanye focus is on four anchor resources, with the high-grade Driefontein complex alone able to cover the capex required for gold recovery.

At the same time, its Cooke tailings dam resource is sufficient to cover the capex required for uranium recovery.

The four key anchor resources are sufficient to feed the plant with 1.4-million tonnes a month for 18 years and cover the capital for the balance of the resources, which then form a yearly income for another 35 years.

The Driefontein 3 and Driefontein 5 tailings dams contain 1.2-billion tonnes for supply to the block thickener, which will thicken the slurry to allow for water recycling and water preservation.

At the central processing plant, gold and uranium will be recovered through flotation and benign tailings deposited on to the regional tailings storage facility.

Driefontein 5, which will provide four years of supply, will be followed by Driefontein 3 for another three years, after which the Ezulwini Cooke 4 south tailings dam will come into play, as the third of the four key resources that will be used to pay off the required capital.

In parallel to mining the one million tonnes, Sibanye intends bleeding in 400 000 t from the Cooke tailings dam, giving the 1.4-million tonnes for the central processing plant, located between Kloof 1 and Kloof 4, in the middle of infrastructure that is already supplied with electricity, compressed air and water.

The central processing plant, which has been structured for modular development, will eventually extend over 75 ha.

The regional tailings storage facility, on a sizeable 1 350 ha, is being planned in two phases in anticipation of the ramp up to treat an eventual four-million tonnes a month, the full tonnage that Sibanye is capable of doing on the West Rand.

The first phase will have a 660 ha footprint, also in two phases, again from a capital management perspective.

Most first phase land is owned by Gold Fields, for which Sibanye has an acquisition agreement to build the regional tailings storage facility.

While much focus remains on the four key anchor ‘get-into-business’ resources, Sibanye’s ultimate vision is to continuously and incrementally build additional modules to treat up to four-million tonnes a month.

It intends doing this by building an additional module every two or three years to increase the throughput of the plant incrementally to four-million tonnes monthly through the central processing plant.

What that would mean is that the WRTRP would eventually get up to around 210 000 oz of gold a year and 2.5-million pounds of uranium through that profile.

The total capital bill associated with that is anticipated to be around R12.5-billion to R13-billion, the first R9.6-billion going into the establishment of the initial construction, which is essentially the regional tailings storage facility, which will be accommodated in the original phase, but also the first module from the gold, uranium and sulphuric acid perspectives.

An all-in cost of R222 000/kg is calculated for the production of the gold ounces, which translates to $476/oz.

Where there is flexibility is that there is a lot of common infrastructure, including the gold, uranium and acid plants as well as the shared capital on the deposition site and pipelines to get the funding strategy off the ground.

Sibanye will look to fund only the capital required for the gold portion of the WRTRP.

Sibanye is looking to fund only R4-billion of the R9.6-billion, purely to get the 1.3-million ounces of gold out and all the gold that comes out of the annuity resources thereafter

Memorandum of understandings (MoUs) have been signed with third parties for the funding of the uranium and acid portions of the plant.

A third party will come in and invest in the capital required to generate the 34-million pounds of uranium and for that they would get the offtake of the uranium.

There is a lot of strategic focus around uranium and not its absolute cost and price. It is more around the strategic access to having substantial volumes of uranium produced reliably over a period of time to support nuclear power stations.

“We are fairly advanced and our third party is coming through this month to thrash out the terms of the binding agreements,” Stuart tells Mining Weekly Online.

On the acid plant, there is more complication.

Not in the business of producing acid and set to produce far more than its own uranium leaching requirements, steps are being taken to have an engineering procurement, construction and management (EPCM) contractor to come in on a build, own and operate basis, for which the EPCM will provide the capital.

An MoU has been developed and Sibanye is working the terms terms, with funding agreements expected to be finalised soon.

The WRTRP, with a net present value of R4-billion net present value, has a 33% internal rate of return at a gold price of R600 000/kg, which does not take into account any of the additional benefits from the annuity resources.

If the funding did not come through as anticipated and Sibanye had to go it alone with gold, Sibanye could pursue the option and delay the capital for the uranium and acid plants. (Also watch attached Creamer Media video)