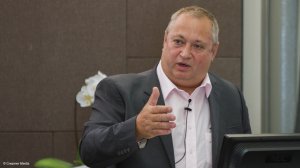 JOHANNESBURG (miningweekly.com) – In an unprecedented move, the record rand price of gold has prompted gold mining company Sibanye Gold to exercise its bona fides by calling on its employees, unions and associations to return to the table, not to reopen wage negotiations, but to enter into a dialogue on an innovative social and economic compact, involving job protection when margins are low and the exercise of greater wage latitude when margins recover.

The South African gold mining industry as a whole tabled the same concept during last year’s wage negotiations, where it was spurned by union leaders, who viewed it with suspicion.

But Sibanye went all out on Thursday to show its sincerity of intention by calling for the concept to be revisited now that the company’s margins are being significantly elevated by a record local currency gold price of more than R600 000/kg. (Also watch attached Creamer Media video).

“It was very sad to me that the unions and associations did not engage properly and buy into the new social and economic compact when it was tabled last year,” Sibanye Gold CEO Neal Froneman commented during the company’s presentation of financial results, attended by Creamer Media’s Mining Weekly Online.

Anyone who had watched the rise of the rand price of gold in the last few months would see that the unions had not done their members any favours at all by not having engaged.

While conceding the benefit of hindsight, Froneman made the point that the tabling of the new social and economic compact had been done with genuine intent.

“It was not a wage negotiation tactic. It was a sincere intervention by the industry to move into a different dialogue with unions and associations,” the CEO of the Johannesburg- and New York-listed company recalled, adding that the widening of Sibanye’s margins was now significant.

“We continually get told that wage negotiations are not the place to table these sort of concepts. So let’s go back to the table. We’re not going to reopen wage negotiations, but we need to enter into a dialogue around a social and economic compact and the modality of that,” he emphasised, explaining that the company was under no obligation to revisit what was a ground-breaking initiative.

“But these are the kind of changes that are necessary in the industry for it to be a better industry,” he added. (Also watch attached Creamer Media video).

Froneman was atypical from the outset of the presentation of results for the six months to December 31, spending time on resharing the company’s vision of “superior value creation for all stakeholders” – not just shareholders – through mining multicommodity resources, predominantly in South Africa, as well as the modernisation of the South African mining industry as a whole.

Sibanye was living by the Joburg Indaba’s definition of modernisation, which stated that a modern mining industry would cause no harm to people or the planet in optimally extracting and beneficiating South Africa’s natural resources.

It must benefit both the local community and the national economy, procure locally and be a preferred employer of skilled people while creating appropriate risk-adjusted returns for investors.

If the mining industry did things right, it would be able to shed its sunset tag.

Elaborating on the manner in which Sibanye was benefiting all stakeholders, Froneman recited chapter and verse how the company is facilitating affordable home ownership for all its employees.

“Quality” houses being built and sold by the company were affordable under existing living-out allowances, with employees able to obtain bonds through normal commercial financial institutions.

“Real, substantial, material and sustainable” progress had been made in accommodating employees, and communities were benefiting from the company’s investment in multistakeholder projects to re-establish the West Rand as an agricultural hub.

Together with Gold Fields, Sibanye had already created 640 jobs through local economic development programmes and was planning to create another 1 000 by the end of 2018.

The company had 305 bursars, 6 321 learnerships, 6 673 local community representatives undergoing adult education and another 6 000 being provided with portable skills.

It had spent R130-million on uplifting labour sending areas, built two clinics that service West Rand communities and had 17 school projects on its books.

For investors, it had declared a final dividend of 90c a share, taking the full dividend for the year to 100c a share and returning another R916-million to shareholders, coming close to meeting its R1-billion-a-year target in a poor operating year.

In 2013, the company paid out R823-million in dividends and in 2014 just over R1-billion, which was being retained as the dividend target.

The company has achieved a share price appreciation since listing three years ago of R31.34 a share, with R3.24 a share paid out in dividends, which brings the total return to shareholders from listing to R34.58 a share – a 275% return on investment amounting to roughly R38-billion of value created.

That is a 55% yearly return when expressed in compound annual growth rate terms.