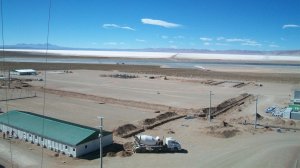 VANCOUVER (miningweekly.com) – Investment activity in South America’s so-called ‘lithium triangle’ salt flats, or salars, is heating up with the announcement Wednesday that lithium producer Orocobre has signed a letter of intent (LoI) to acquire 31% of Advantage Lithium, in a deal valued at about $33-million.

In return, Advantage will gain the option to earn up to 75% of ASX- and TSX-listed Orocobre’s Cauchari project and a 100% interest in five other lithium brine projects spread across the northern Jujuy, Salta and Catamarca states, in Argentina. The six lithium brine projects constitute an 85 543 ha land package.

"This agreement creates an exploration company in Argentina without peer. Argentina is part of the lithium triangle, home to over 70% of the world's known reserves and Orocobre is not only one of the country's leading producers, it is one of the largest producers in the world,” Advantage president and CEO David Sidoo stated on an investor conference call.

Under terms of the LoI, Advantage must raise at least C$15-million, for which it has engaged Dundee Securities and Canaccord Genuity to act as co-lead agents for a private placement offering of transferrable subscription receipts at C$1 apiece. It has also approved an over-allotment option that could push total proceeds up to C$25-million.

The terms and conditions of the acquisition will be set out in the definitive agreement yet to be finalised. To acquire the projects, Advantage will issue 40.62-million common shares to Orocobre, which will represent no less than 31.1% of the outstanding common shares of Advantage following the financing.

THE DEAL
The parties will enter a joint venture regarding the Cauchari properties, with each party initially holding a 50% interest. Advantage will be able to earn a further 25% interest in the properties by spending $5-million or completing a National Instrument 43-101-compliant feasibility study during the three-year period following receiving the environmental-impact statement for the Cauchari properties.

After closing, Advantage will be the operator of the projects, but Orocobre will retain a 1% royalty on the Cauchari properties, and will have rights of first refusal on brine production.

Orocobre and the Advantage insiders will enter a pooling agreement under which the parties will agree not to sell their shares of Advantage for specified periods after closing, subject to customary exceptions.

Further, if Orocobre holds at least 10% of the issued and outstanding common shares of Advantage, Orocobre will have a pre-emptive right to maintain its proportionate interest in Advantage by participating in future offerings of securities by the company.

Following the deal two Orocobre directors will join the Advantage board, expanding it from five directors to six.

Advantage will ask shareholders to vote at a board meeting scheduled for December.

Pending shareholder and regulatory approvals, closing of the transaction is expected during the first quarter of 2017.

Cauchari is located 20 km south of Orocobre’s flagship Olaroz project and lithium facility and the deal includes the potential for an offtake agreement. The similarity in brine chemistry results in potential for Cauchari to be developed in conjunction with Olaroz.

The project is located on trend to current or future production and has ready access to roads, gas pipeline and a processing plant on site. The company plans to spend $7-million over the next 36 months to move the project to the feasibility stage.

The other exploration properties comprise Antofalla and Incahuasi, in Salta, and Guyatayoc, in Jujuy, with two projects currently under application.

Orocobre's TSX-listed stock gained 6.78% to C$4.41 a share on Wednesday, while the TSX-V-listed stock of Advantage remained flat.