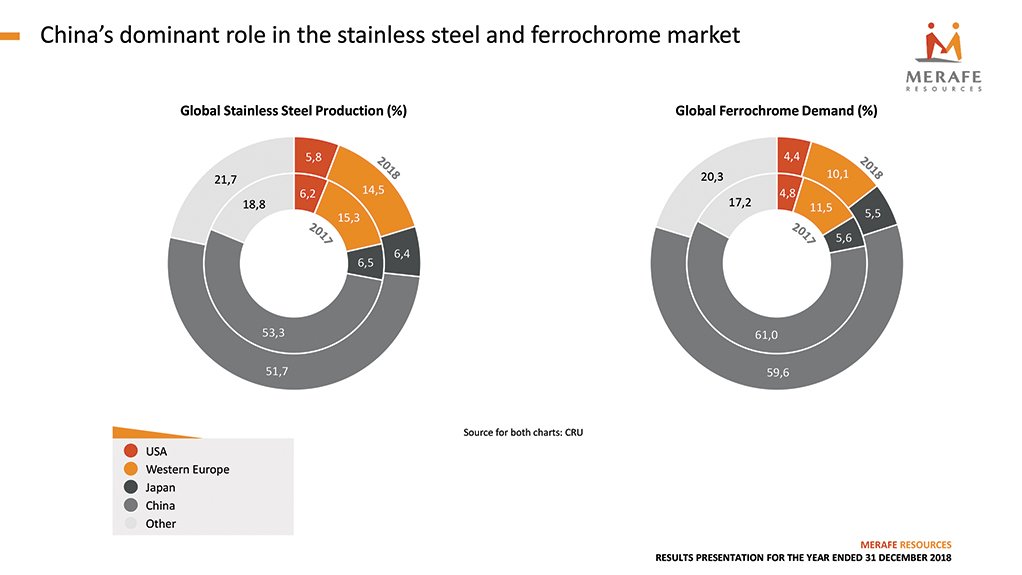 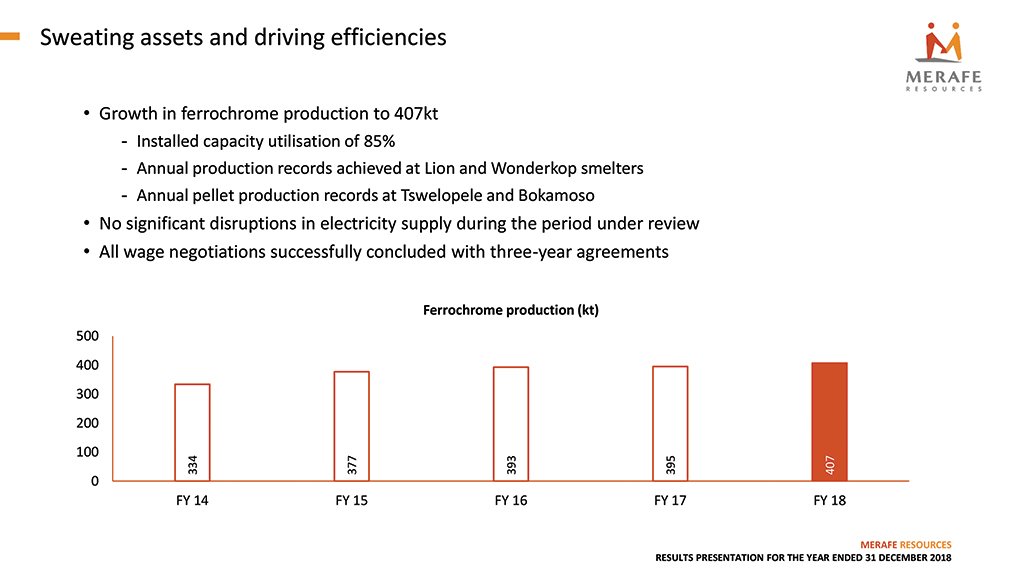 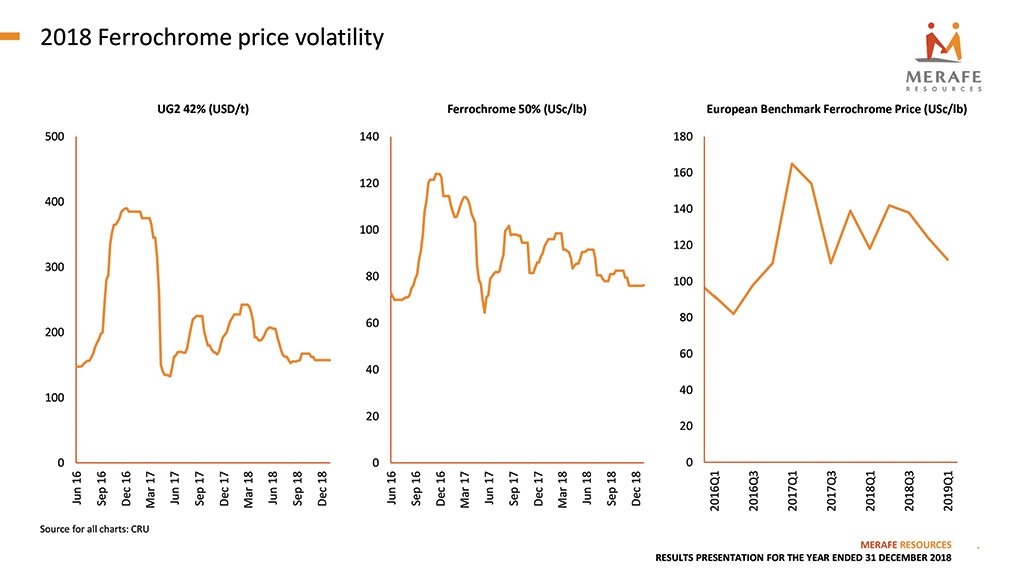 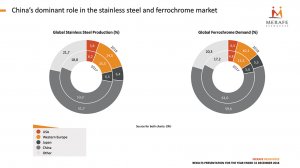 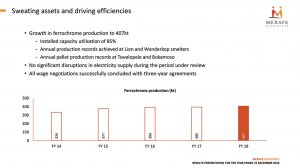 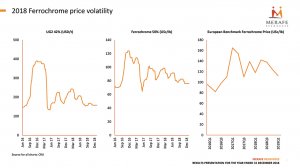 JOHANNESBURG (minngweekly.com) – The demise of State power utility Eskom has caused South Africa to lose its optimal position in the lucrative ferrochrome business.

Because of Eskom’s decline, unbeneficiated chrome ore exports from South Africa to China have enabled the Asian giant to ascend up the ferrochrome production ladder.

As reported by the Johannesburg Stock Exchange-listed chrome and ferrochrome company Merafe Resources on Monday, 76% of the chrome ore imported by China last year came from South Africa.

Merafe shares in 20.5% of the earnings before interest, taxation, depreciation and amortisation of the large Glencore-Merafe Chrome Venture, the world’s second lowest cost producer.

If upper group two (UG2) resources are included, South Africa has more than 80% of the world’s chrome resources but is unable to turn that endowment to optimal account because of Eskom’s problems.

On the carbon tax front, considerable relief has been provided until 2022, which is one of the recommendations the ferrochrome industry put forward in an eight-page solution.

But electricity availability and at competitive cost remain the obstacles in the way of re-ignition of the significant latent socioeconomic boost that a ferrochrome revival can offer the South African people.

This is because ferrochrome creates 17.3 jobs for every thousand tonnes of ferrochrome exported. What Eskom has caused is the export of most of these jobs through the unbeneficiated export of raw chrome ore, which creates only 5.7 jobs for the same volume of raw ore sent out of the country. Moreover, ferrochrome exportation can add an additional 400% to South Africa’s gross domestic product (GDP) potential.

Should a State electricity utility be permitted to prevent such valuable job and wealth creation?

“For a company that uses the volume of electricity that the venture does, it’s pretty difficult, if not impossible, to replace Eskom generation at this point in time,” Merafe COO chrome Hugh Stewart said in response to Mining Weekly Online’s question.

“We do whatever we can on our side to mitigate the effects should there not be sufficient electricity available. Those efforts centre mainly on heat recovery, generation of additional electricity and cogeneration.

“We’ve already, at one of our operations, established a plant to cogenerate partial electricity supply and we’ve got scope to increase that. Then, at all our closed furnace operations, we’re evaluating cogeneration together with, perhaps, gas-to-liquid fuel conversion plants that would also alleviate Eskom’s challenged power supply. But we remain very subject to Eskom’s performance,” he said.

The efficient use of energy – enhanced by pelletising to cope with increasing volumes of fine chrome ore, in-house training programmes to overcome skills shortages, the proximity of the Port of Maputo, the use of more cost-effective UG2 chromite ore recovered from platinum tailings, as well as radically reduced use of expensive coke – is the key source of the competitive advantage of both phases of Lion. The bulk of the Lion smelter’s ore arrives by road from the venture’s Thorncliffe and Magareng mines, which are some 25 km away, and the final ferrochrome product leaves by road in an area not served by rail.

The Glencore Merafe Chrome Venture owns and operates a number of chromite mines and 22 ferrochrome furnaces, with a combined installed capacity of 2.34-million tons of ferrochrome a year.

Thirteen of these furnaces, situated at Rustenburg, Wonderkop and Lydenburg, use a combination of conventional semiclosed submerged arc furnace and Outokumpu pelletiser technology. The 396 000 t/y Lydenburg operation pioneered the Premus process ahead of its adoption at the Lion project. The Boshoek operation comprises two closed furnaces based on Outokumpu pelletising technology including preheating.

The venture takes part in Eskom’s demand response programme, which provides the company with protection during stage one and stage two load-shedding procedures.

“It did affect us. If you look at those three days in the overall picture of the whole year, it’s actually negligible. In terms of stability of plant, there are some issues that we experience that are more difficult to quantify. But as long as it remains limited, load-shedding does not have a big impact. We have got sufficient stocks to serve or customer needs and in fact at a time like this when we don’t know what to expect from Eskom, the situation is very much in flux. It is a good situation to be sitting on some stocks that could serve as a guarantee and that we know is there to supply to customers,” Stewart said at question time on Monday, when chrome and ferrochrome company Merafe reported lower profit on higher production and declared a record dividend that represents a distribution of 51% of headline earnings, compared with 33% in 2017,” said Stewart.

On logistics, Stewart said in response to Mining Weekly Online questioning: “There’s always room for improvement in terms of logistics but the incident that affected us last year was the one in December where there was a presumed sabotage rail incident on the Richards Bay line, which actually caused havoc en route to the ports and also in the ports. That set our December volumes back substantially.

“As it is, logistics are sufficient to serve our purpose. We don’t normally struggle to get enough material down to the ports. It’s just when we have incidents like the one in December that it sets us back. But we are continuing to engage with Transnet as well to try and get more material on rail. A considerable portion of our exports go on roads down to the ports, which is not a good situation at all and we would always work hard on getting more of that material on to rail rather than road,” he added.

The carbon tax that will been implemented at R120/t of carbon dioxide emitted, will be adjusted by consumer price index (CPI) plus 2% a year until 2022 and thereafter by CPI.

“After 2022, the situation’s still unclear. We’re not sure which way it’s going to go and we await confirmation from government over time,” Stewart told Mining Weekly Online.

On the tax implemented, discounts apply for the next three years. Envisaged are collective discounts totalling at least 80%.

“That certainly brings relief in the short term. The big uncertainty is what happens after 2022 - we’re not sure what the situation will be,” he added.

The objective of the South African government is for companies to achieve increasing levels of beneficiation in the country, and “we support that”, said Stewart.

The group’s skills development centre develops the skills of the local communities to ensure a continuous availability of artisans for the company’s smelters.

The industry as a whole has also had discussions with government in the past regarding possible export duties aimed at curtailing the export of chrome ore to enable the local producers to be more competitive.

Unfortunately, looking short term, the opportunities and investment climate are not there for people to invest in the beneficiation plants because of the electricity shortage and its high cost.

“But let’s hope that within the next few months, Eskom starts sorting out their problems, especially at the new power stations of Medupi and Kusile, which would then provide additional electricity to improve the situation. But that’s really what we need to have the capacity to beneficiate more ore and then to lobby government on possible export duties on ore,” he said.

Meanwhile, China is clamping down on older plants in favour of newer plants that are far more environment-friendly.  “We get the feeling that climate change and also pollution are being taken very seriously by the Chinese government,” he added.