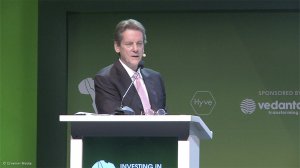 CAPE TOWN (miningweekly.com) – Canadian mining company Ivanhoe Mines chairperson Robert Friedland is capitalising on the rising need for more copper globally, with a mission to restore the Democratic Republic of Congo’s (DRC's) position as the number one producer of copper metal in the world.

Friedland told the 2020 Investing in African Mining Indaba, in Cape Town, that the company was building "three of the best mines in the world" through its Kamoa-Kakula copper project in the DRC, and that it was exploring for the next giant copper mine.

He described Kamoa-Kakula as the first world-class copper discovery in the DRC in a century.

Ivanhoe on Wednesday announced the completion of an independently verified, updated mineral resource estimate for its Kamoa-Kakula project, which is one of two very large, copper deposits discovered to date on the 400 km2 Kamoa-Kakula mining licence.

With air pollution choking many cities across the world, copper production is set to increase sharply. Just one example is the rocketing demand likely for electric vehicles. Friedland said the demand for copper for electric cars was expected to rise 900% by 2027. “The whole electrical system is massively copper intensive. All electric cars now use four times more copper than conventional gasoline-powered autos.”

He described a widespread shift in transport, from electric buses in London to more than 100 different electric-aircraft programmes in development worldwide.

Friedland said the global wind turbine fleet was also expected to consume more than 5.5-million tonnes of copper by 2028. Wind and solar energy is up to 37 times more copper intensive than conventionally generated electricity.

Friedland said China was currently buying half the copper in the world. “If China’s stomach is not full, the price goes up and everyone pays a higher price.”

The potential for the DRC economy was immense.

“Africa has the richest mineral deposits in the world. Congo is growing at 7%, and there’s no reason why it couldn't grow at 15%”.

“Copper is the king of green metals if you want to clean the air,” said Friedland, adding that surfaces covered in anti-microbial copper could also reduce patient infections. He said 4.2-billion people were currently living in cities. This would rise to 6.7-billion in 2050. He said air pollution had been identified by the World Health Organisation as the greatest environmental risk to health. Nine out of ten people worldwide are breathing polluted air.

Friedland quoted research showing that toxic smog and air pollution killed more people than AIDS, smoking and war worldwide, and caused chronic kidney disease, heart disease and 2.7-million premature births a year. He said a study had shown that there was a higher incidence of dementia associated with living close to heavy traffic.

“Humans are vulnerable to air pollutants seeping into bloodstreams and brains,” said Friedland.

The need for cleaner air would also have a profound effect on the need for other precious metals, said Friedland.  These include palladium, platinum and rhodium, which are required in catalytic converters to control harmful emissions in exhaust from vehicles and factories.

Friedland said its platinum project in South Africa would be a major worldwide source of rhodium which had soared in price recently.

He said palladium was also worth "more now than gold has been in human history".

“For the eighth straight year, this metal has gone into deficit.”